Why I Hate Fordson Tractors

So even though I don’t want to, here’s some brief history on the Fordson.

A Begrudging History Of The Fordson

The Fordson was the brainchild of Henry Ford who succeeded in revolutionizing the automobile industry with his reliable, efficiently built and cheap Model T automobile.

Henry knew the back breaking work the farmer faced every day. He was raised on a farm and experienced the work first hand. These experiences led Ford to develop his first automobile.

He always wanted to improve the lives of farmers by giving them access to cheap mechanical power. With the success of the Model T, Ford was able to continue his pursuit of the perfect farm tractor. The first experiments were with modified Ford automobiles, which proved problematic to say the least.

These experimentations eventually led to the first model of his Fordson tractor designed by Eugene Farkas. Henry was known for his almost daily tweaks and modifications to his prototype tractors. The Fordson was still in the testing stages when the British Ministry of Munitions (MOM), placed an order for 6,000 Ford tractors for the war effort.

World War 1 was ravaging Europe and blockades kept imported grain from reaching the British. The British government decided they should start production of tractors in the country and ramp up domestic food production. Henry sent two Ford tractors designed by Eugene Farkas to England for testing. The British Board of Agriculture was impressed with the tractor demonstrations and recommended the British Ford subsidiary promptly go into full production.

Henry had already planned to open a plant in Ireland, so that was the natural location for production. The Irish plant was bombed shortly after production and the British requested Ford build the tractors and ship them to England while domestic production ramped up. Ford delivered the first 254 tractors in 1917. 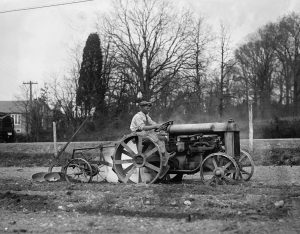 The orders from the British gave Ford the needed push to ramp up their domestic production in Dearborn, Michigan and gave them a good position to break into the American market. With World War 1 continuing, the United States Department of Agriculture put in an order for 1,000 Fordson tractors. With all this governmental help, Ford was able to jump into the American market in late 1918 and produced a total of 34,167 tractors.

That’s way more history than I ever wanted to know or write about the Fordson tractor. It’s brief and I’m sure the Ford aficionados have some corrections they’d like to make. I hate to write it, but Henry Ford made a great accomplishment in a rather short length of time. This sudden entry into the market caught his competitors off guard.

Even though the Fordson was new to the industry, Ford had a massive network of dealerships and service men. This built in distribution gave Ford seamless integration of his new line of tractors.

The Destruction Of The Competition

The Fordson Model F is what started it all. It was released in 1917 and continued to 1928 when it was replaced by the Model N, (an equally hideous tractor).

Henry was a bit before the curve. Most of the big tractor manufacturers saw that a simple, reliable, light weight tractor was what the farmer needed, but getting the price down and production up was a massive challenge. Ford figured out how to overcome those challenges.

It was during this time in the early to mid 1920’s Ford destroyed many of its competitors. There was a downturn in the farm economy and most tractor manufacturers were already struggling.The second blow came when Ford lowered the cost of the Fordson from $620.00 and later to the rock bottom price of $395.00 US dollars.

Other manufacturers struggled to keep their prices competitive. Even if the competition’s product was better, most farmers settled for the cheaper alternative, (many of which later regretted). I assume the buyer’s remorse was high.

“I purchased the Fordson because it was cheaper than the 10-20 Titan and I already had a plow. I was constantly having issues with the wooden coils. It had great fuel economy, but it lacked power. My neighbor purchased a 10-20 Titan. He could out plow me and always finished before me in the field. If I had to do it over, I would have bought the Titan.” *

This leads to one reason I hate the Fordson. It bankrupted companies that had a better tractor and left behind manufactures who had some great design ideas.

The Silver King Company is a good example. Here is a competitor that was late to the market, but had a vastly superior product than Ford. What they lacked was a strong dealer network and slick marketing executives.

Henry Ford thought so much of these tractors he bought some just to tear them apart and analyze his competition.

This is just the nature of the American capitalist system I love. Competition equals a better product. It’s why we have smart phones and laptops. Without competition, who knows what kind of communist crap farmers would be driving today. It’s highly unlikely they’d have GPS or precision planting.

The fact that I agree with this system, doesn’t mean I like what the Fordson did. The stock market crash also added to the woes of agricultural manufacturers. They began dropping like flies.

The Death Of Innovative Designs

It’s certain the Fordson led the way in practical design. Once the Fordson was released, the competition moved to an automotive type radiator, similar cast iron top with the name of the company embossed in it. The gas tank found a standard location on top of the engine, with most being a four or six cylinder vertical gasoline engine.

Gone were the days of the Gray Drum Drive, The Square Turn or the Hackney Auto Plow. Impractical, innovative and just plain cool designs were being thrown out by the truckload.

This is another reason I hate Fordson Tractors. By creating an economical, smaller, highly functional, and ugly tractor, they made other companies follow suit. It ended most of the unique designs, but did lead to International Harvester creating the innovative Farmall Regular.

The antique car world and the antique tractor world have one thing in common. We love failures. Failures have great stories and unique designs AND they are low production. Meaning highly collectible.

Now, for some reason people are fixing them up, and It’d be hard to buy a nice running Fordson F for under $3,000. I don’t blame them though. They are easy to work on and since they made a gazillion of them, parts are readily available. Still…really?

This Rise Of The Competition

There was one company that gave Ford a run for their money. Their 10-20 Titan was not the biggest success and the Fordson vastly out produced them. Their later 10-20 and 15-30 McCormick-Deerings did fairly well against the Fordson, but they really didn’t gain the competitive edge until 1924.

The Fordson like most others were standard tread tractors which were good for field work and planting, but not suitable for things like cultivation. This led to tractors like the Rumely Do-All which was an early transformer which could switch between standard and cultivator tractor. But a tractor like the Do-All was expensive and having to switch it was a giant pain in the butt. The Do-All wasn’t alone, there were dozen’s of companies that tried to make a motor cultivator tractor.

For years International Harvester seeked a solution. Their first commercial endeavor was the Motor Cultivator, a top heavy beast that was more death trap than tractor. They recalled it after just a couple years and went back to the drawing board.

What they came back with caught the competition off guard. In 1924 they released the Farmall Regular, a row crop tractor. It was the all in one versatile tractor farmers wanted. And Ford? They were left treading water.

The next few years International led the way, producing a total of over 131,300 Regulars from 1924 to 1932. Other manufacturers followed suit and the row crop tractor became the mainstay for farmers.

The Reasons To Hate 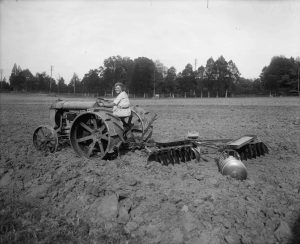 What’s there to hate about the Fordson? The list is long. I’ve already listed many already, but I’ll do it again. It’s ugly. It destroyed some amazing competitors. It phased out innovative designs. It lacked power. Its coil system was prone to failure. It was rough riding. It was painted an ugly grey. There’s more, but you get the jist.

The Reasons To Admit Success 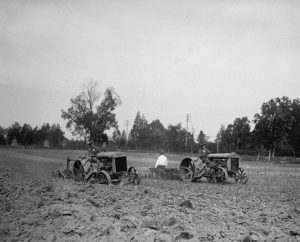 What is there to like about the Fordson? Very little. It was cheap and it was better than walking behind a pooping farting horse all day. That’s it. Of course it was pretty reliable and easy to start, but that’s not important.

And the success of the Fordson led to the partnership with Harry Ferguson which resulted in the 3-point hitch. But I’m not going to talk about that because it’s a positive thing for the dam Fordson. Instead lets ignore that ever happened and maybe pretend International Harvester was the first to have the 3-point.

Also thanks to Ford, tractors were built on an assembly line. When International Harvester was building their first tractors, they started with the frame up on blocks and built them stationary in place. Highly inefficient, but labor was cheap. Ford changed all that. 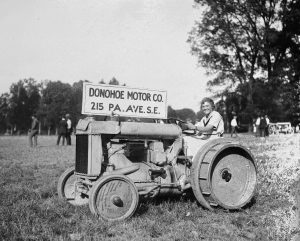 I know there were many internal and external factors that led to the demise of my favorite tractor manufacturers, but I still blame the Fordson.

Am I going to judge you if you own a Fordson tractor? Yes. BUT, if you’re going to own a Fordson, consider buying an industrial or a crawler, or something with unique attachments.

Some would rightly argue that International Harvester’s revolutionary Farmall led to the demise of many tractor manufacturers. More so than the Fordson. I don’t believe that.

Am I trying to rewrite history and say all the blame goes to the Fordson? Yes. Yes I am. Because my hate for the Fordson tractor outweighs any reason or facts. If I believe it hard enough and if I repeat the lie long enough it will become true.

*footnote – The story about the farmer is purely made up to prove a point.