Over 800 Pedal Tractors From The Fisher Collection Selling At Auction

The late Charlie Fisher was always a collector, his sons, Larry and Mark Fisher, point out. In the 1980s, Charlie bought and restored Model A Fords, then he moved on to buy several Silver King tractors.

“Nothing caught his heart like pedal tractors, though,” Larry shares.

The farm toy and pedal tractor collection of Charlie Fisher, who died last year, is now being auctioned by Aumann Auctions in online sales over the next year. The collection of more than 800 pedal tractors of all brands will be offered for auction, starting in October.

The next sale is scheduled for Nov. 10, with customs, originals and more being offered, and another sale is slated for Dec. 6, when boxed pedal tractors will be sold. Each sale will include about 100 pedal tractors, said Aumann Auctions Inc. Auction Manager Roger Johnson.

Also, 1/16 scale models will be offered at a later date online, including approximately 200 models of all brands.

“We will be selling this collection over the course of the next year and the dates will come out as we can announce them,” said Tyson Reed, marketing director for Aumann Auctions. Potential buyers can preregister at aumannvintagepower.com anytime, where auction dates and catalogs of items will be posted.

“We have a variety of everything. It’s the largest pedal tractor collection I’ve ever seen,” Roger said. “He has great models of every brand. He has a very diverse, large collection, with a lot of great customs and originals.” 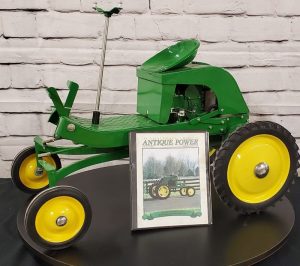 From Norwalk, Ohio, Charlie bought his first pedal tractor in 1999, which was a Ford 8000. His son, Larry, remembers him buying it: “Mark and I had a Ford 8000 pedal tractor with the matching wagon when we were kids. Our dad, Charlie, bought it for us because our grandpa, Johnie Fisher, had a real Ford 8000 for the farm.”

Charlie bought all the Ford 8000 models he could find, and in the past 20 years, his love for collecting took off.

“I was pretty impressed that he amassed that kind of collection in 20 years,” Roger said.

One of Charlie’s favorite tractors was a custom-made Silver King, which he liked because he had the same farm tractor. “We kept that one to remember him by,” Larry said.

“After collecting all the Ford tractors he could find, Charlie moved on to trying to get one of every pedal tractor ever made. He enjoyed the process of restoring some of the more common ones.

He would sandblast and paint them with the specific paint from the companies that manufactured the tractors, fix drive chains, pedals, and steering apparatuses. He would also mount new tires on the wheels and adhere new decals to the tractors.

The only one we know he wanted but never got was the 1949 Coffin Engine made by Eska. Charlie was pretty much able to find the rest. When he died last April, his collection was up to 807 tractors,” Larry said.

Charlie traveled across Ohio, Michigan and Indiana looking for tractors, and he stayed in Florida many winters to attend the auctions and toy shows there. His truck and covered trailer usually came home full in the spring.

“Mark and I have been amazed at how many people reached out to us when our dad passed away last year. He was known locally as ‘the pedal tractor guy.’ He built three custom trailers to display his tractors, and took them to the Fourth of July Parade in Norwalk and other festivals in the area. Dad loved his collection and spent many hours proudly showing it off to anyone who stopped on the farm and asked, Larry Said.

“In his last few years, he bought less tractors, focusing on the more rare custom pedals. Mark and I were amazed at his funeral when Jerry Zehner, one of the many people he met buying pedal tractors, drove five hours to the funeral. We’ve met many people that we didn’t even know after Dad’s death, who just wanted to tell us how much they enjoyed talking to Dad about his collection,” Larry said.

Of the approximately 800 pedal tractors in Charlie’s collection, about 200 to 250 are still in the box and will be auctioned in the boxes. His collection includes a wide range of brands and well-known custom-made tractors. 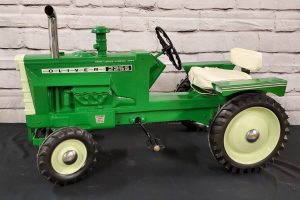 “There were tractors everywhere. … It was really quite impressive,” Roger said. “A lot of collectors will be able to fill gaps in their collection. This should be a good opportunity to do that.”

Although the family is selling most of the collection, they kept the Silver King Charlie liked so much, and it is proudly displayed in his old farmhouse that Larry and his wife, Rhonda, and their children moved into.

“Every time a grandchild was born, their first present from Grandpa Fisher was their very own pedal tractor. We kept the Ford 8000s and a few others to carry on this tradition,” Larry said.

Want to read more articles like this? Be sure to check out Toy Farmer Magazine at https://www.toyfarmer.com/

Check out this clip from Old Iron Adventures, a ne

On the first episode of Old Iron Adventures we'll

A Real Survivor! Check out this 1 of 1, Original 8

Check Out This Rare Combination! WATCH THE FULL VI