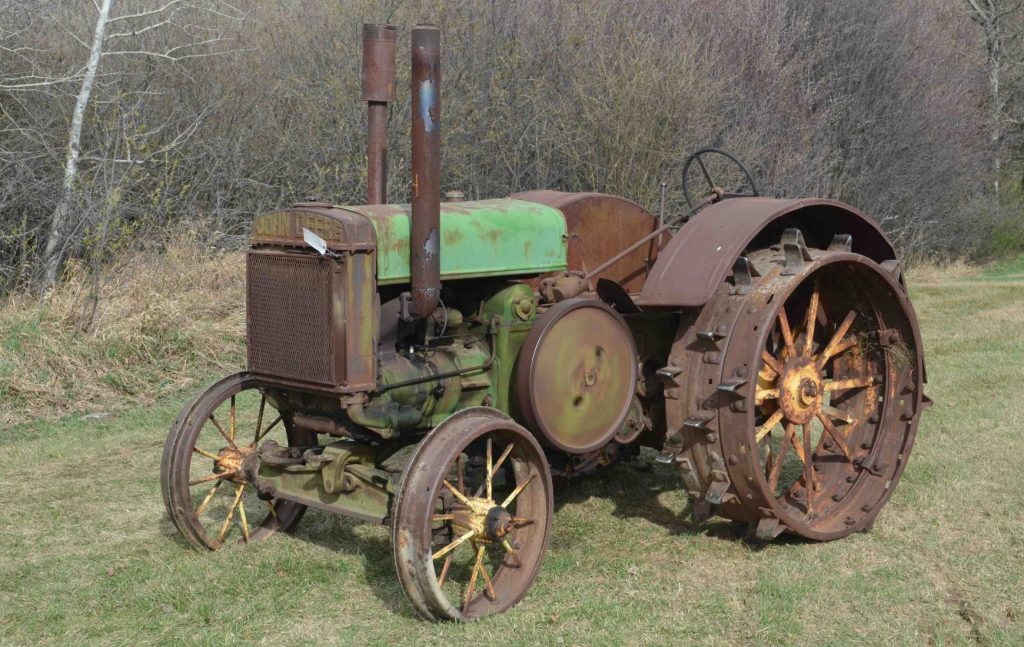 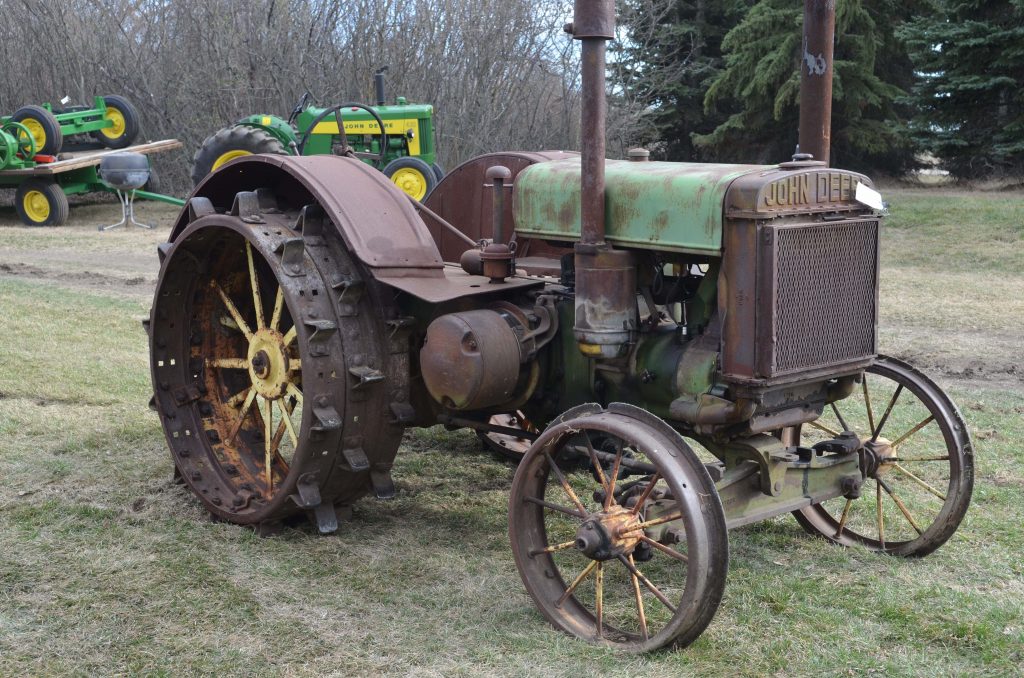 At 31 years the Model D was the longest production run of John Deere’s line of tractors. Over the years the D went through many variations and improvements, some of which are included on this list. 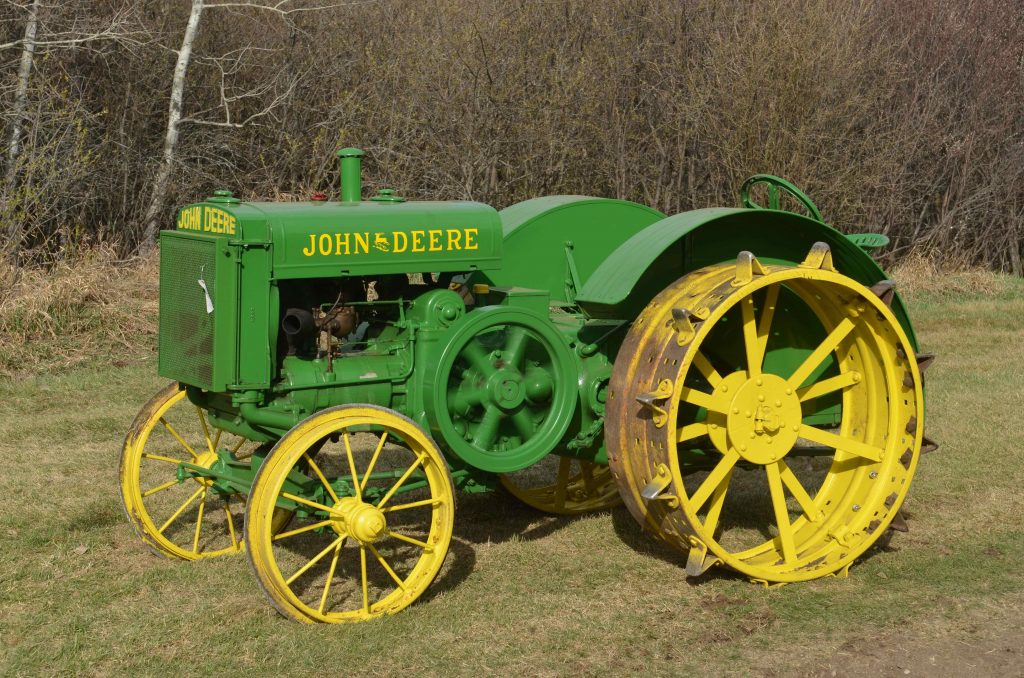 One of the most sought after variations of the Model D has a spoked flywheel. The first 5,846 model D’s built had a spoked flywheel, most likely a hold over from the Waterloo Boy design. These flywheels proved problematic with many cracking around the keyway. 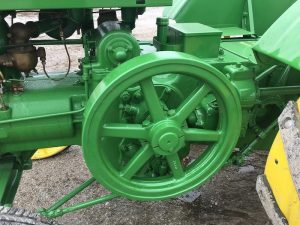 The first 829 D’s built had a spoked flywheel that was 26 inches in diameter and was later replaced in 1924 by a thicker 24 inch diameter flywheel. The smaller flywheel didn’t improve the design and in 1926 Deere switched to a solid flywheel. 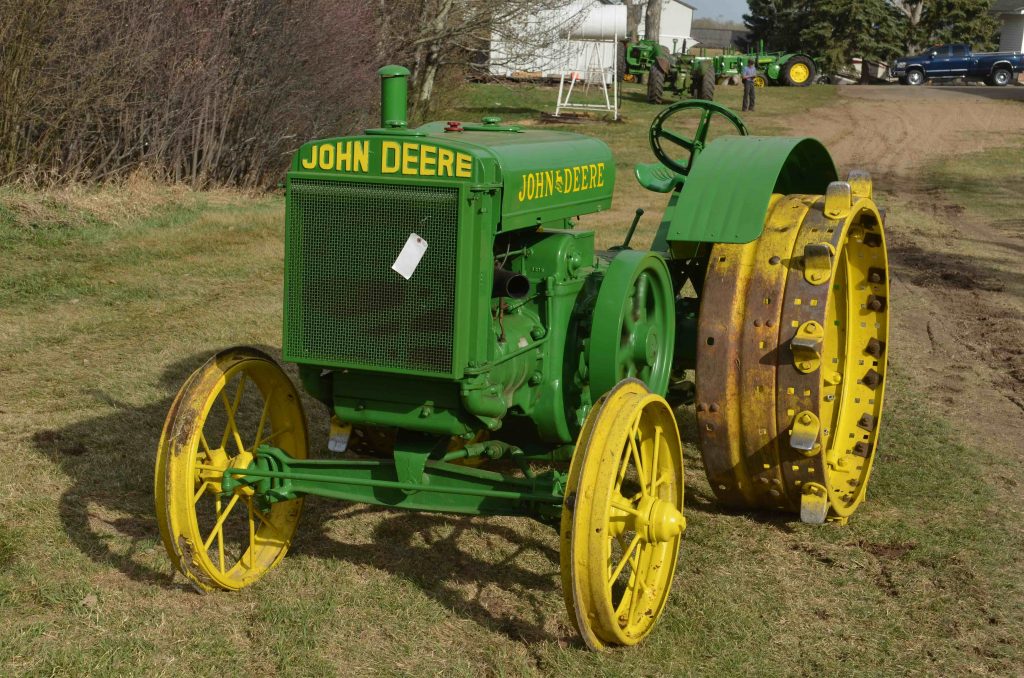 These early spoked flywheel D’s are sought after by collectors and can bring upwards of $20,000 US dollars. Aumann Vintage Power still holds the record for the highest price Spoked Flywheel D sold at auction.

In 2012 the completely restored Model D with spoked flywheel brought $210,000 US dollars on the Lake Side Farms Tractor & Engine Collection Auction. Follow this link to see the tractor sell at the auction, https://youtu.be/hpZBo_LgmzE 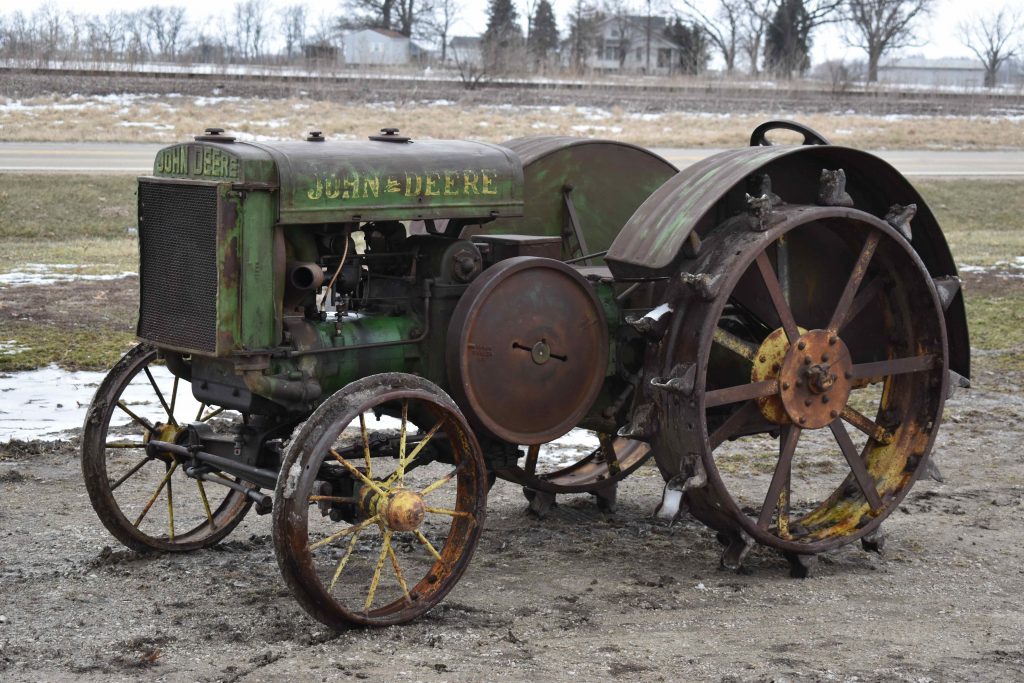 After the failed success of the spoked flywheel, Deere switched to a solid flywheel in 1926. About the first 2,000 had a ⅞ inch or nickel size hole on either side of the crankshaft to relieve pressure that caused cracking.

Engineers found this failed to solve their cracking problem. In late 1926 the flywheel was changed once again to have larger holes in the flywheel. This change ultimately stopped the flywheels from cracking and the design carried through to the end of the production run. 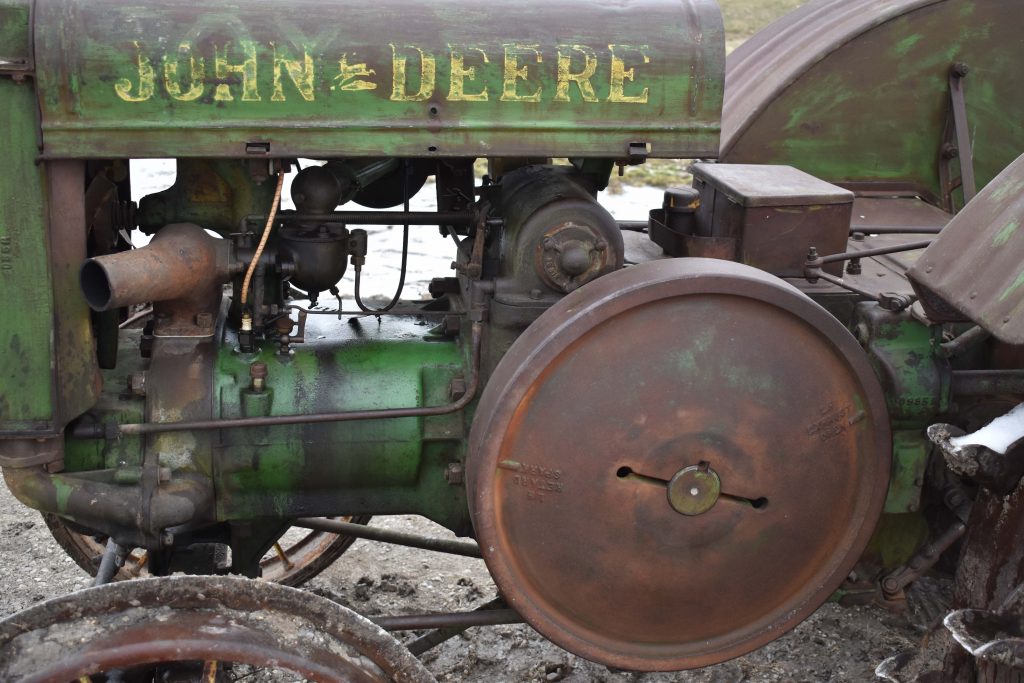 An original Nickel Hole D sold at the 2019 Annual Pre-30 Auction Conducted by Aumann Vintage Power. It brought $12,075 US dollars. Follow this link, https://bit.ly/37vtuiT to see more information on this tractor. 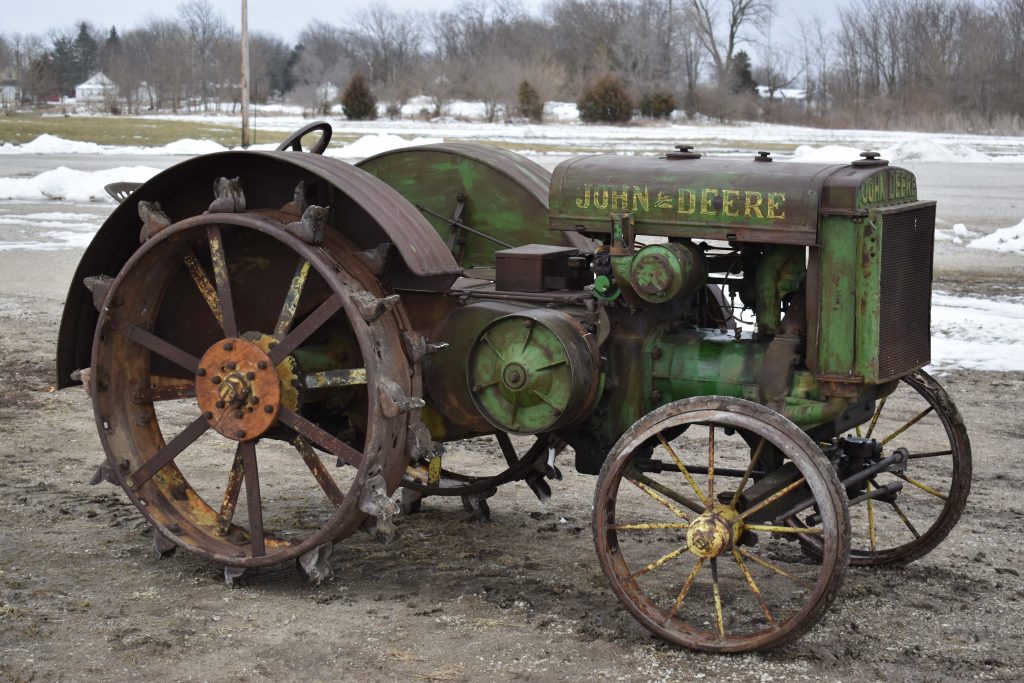 Follow this link, https://youtu.be/g3DZ26fKDWg to watch a video comparing the Spoked Flywheel and Nickel Hole D. 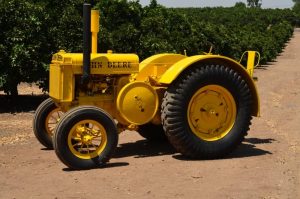 In 1934 John Deere announced the Industrial version of the Model D. This variation called the “DI” was painted highway yellow and sold with pneumatic tires as standard equipment. 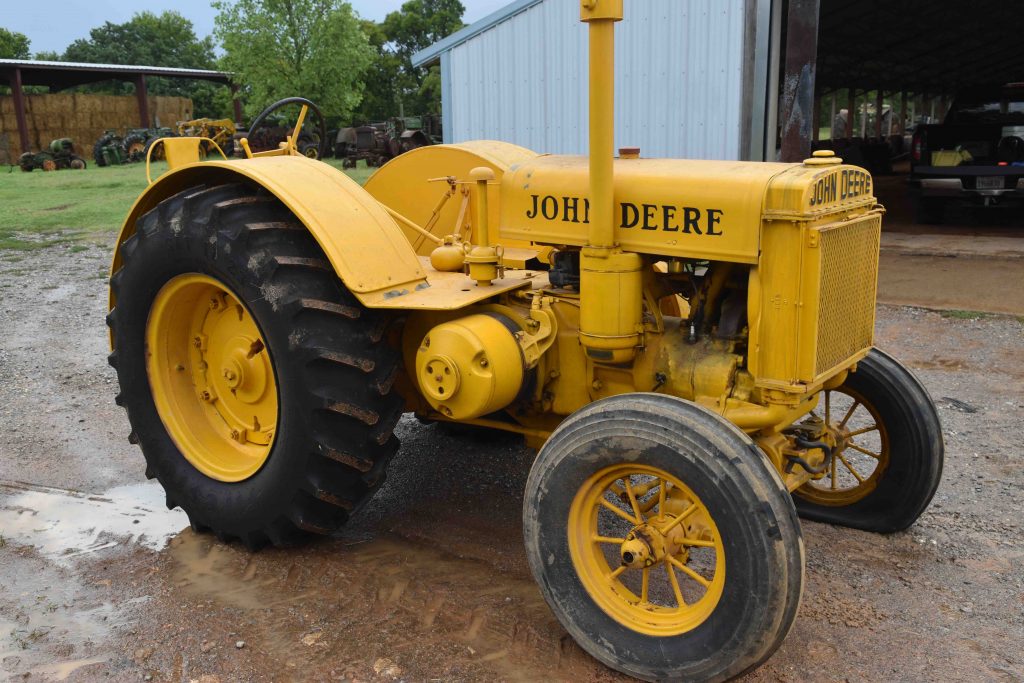 It featured a new three speed transmission capable of speeds up to 7.5 miles per hour, significantly higher than the standard D.

Other features included a cushioned seat set at a right angle to the direction of travel which necessitated extending the clutch and throttle linkages. 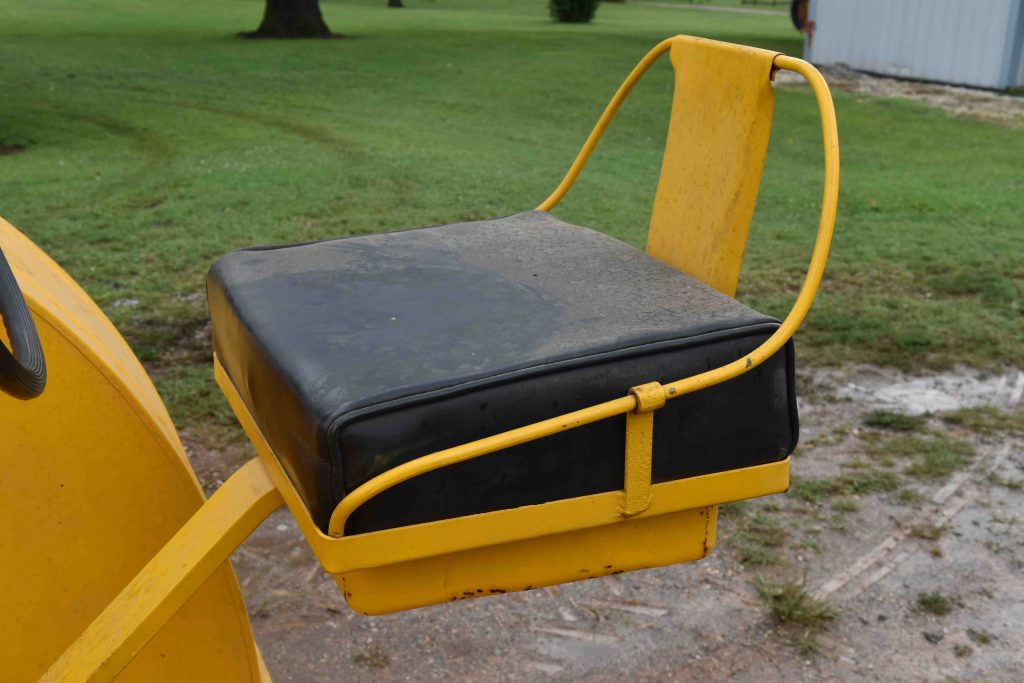 Only about 100 DIs were built. The production of the DI stopped in 1941 and was never styled. Follow this link, https://youtu.be/FD5-L3mjAtk to watch a story on the John Deere DI tractor. 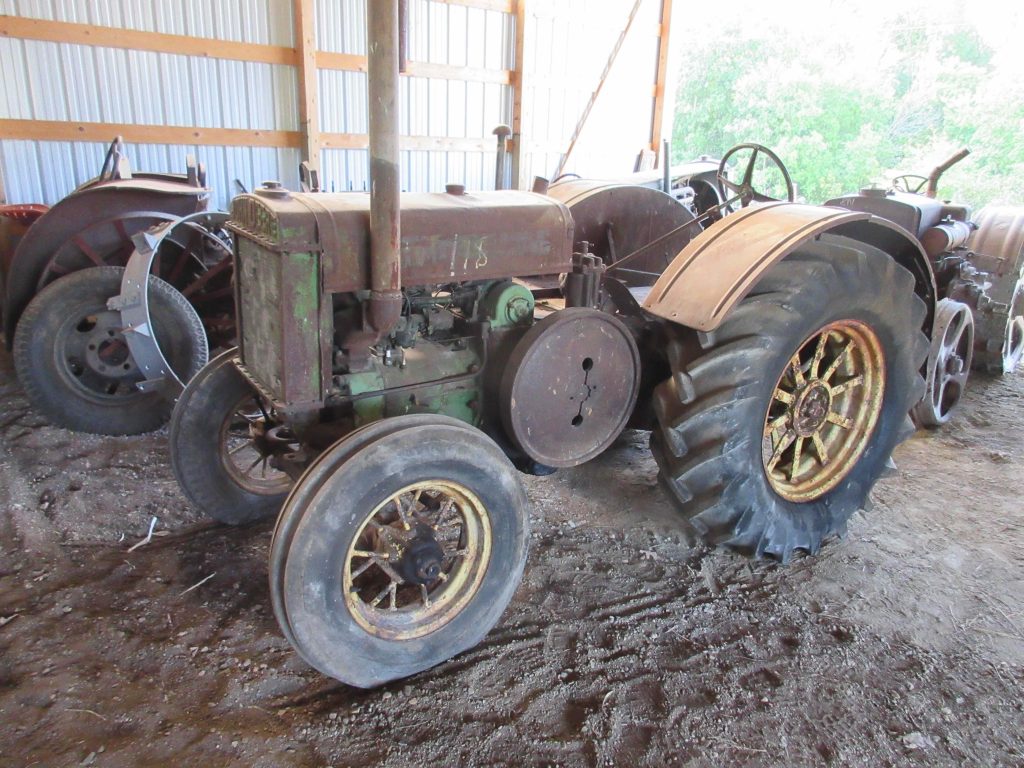 The John Deere Exhibit B was an experimental tractor. Only 50 of these tractors were built to experiment with putting crawler tracks on a John Deere D chassis. 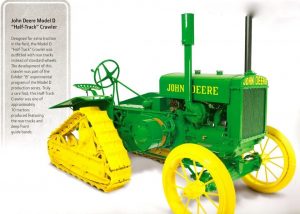 They were sent to Havre, Montana for testing, but didn’t work out. Less than a dozen of the 50 were actually converted to crawlers. The remaining tractors were shipped out to dealers as regular farm tractors.

Along with the experimental parts numbers, exhibit B’s have several key features including: cast iron covers on the transmission housing, a bigger engine with bigger flywheel, enclosed steering, and have duty front hubs. 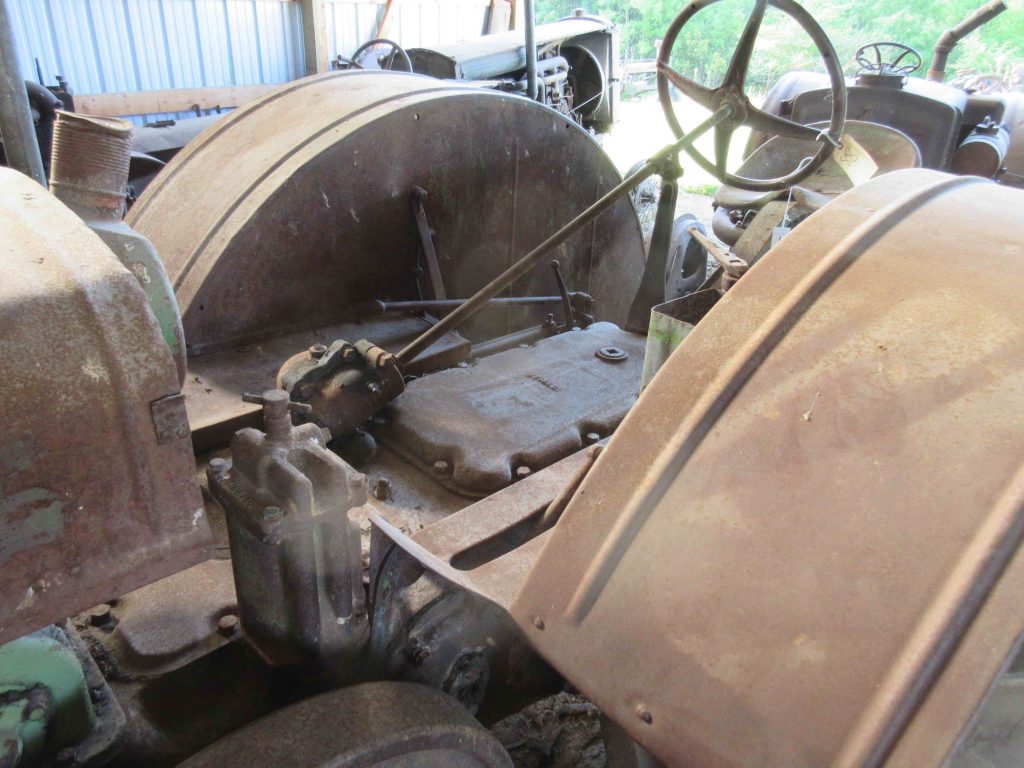 Follow this link, https://youtu.be/zEfQfxIVAY0 to watch a video on the Exhibit B Tractor. 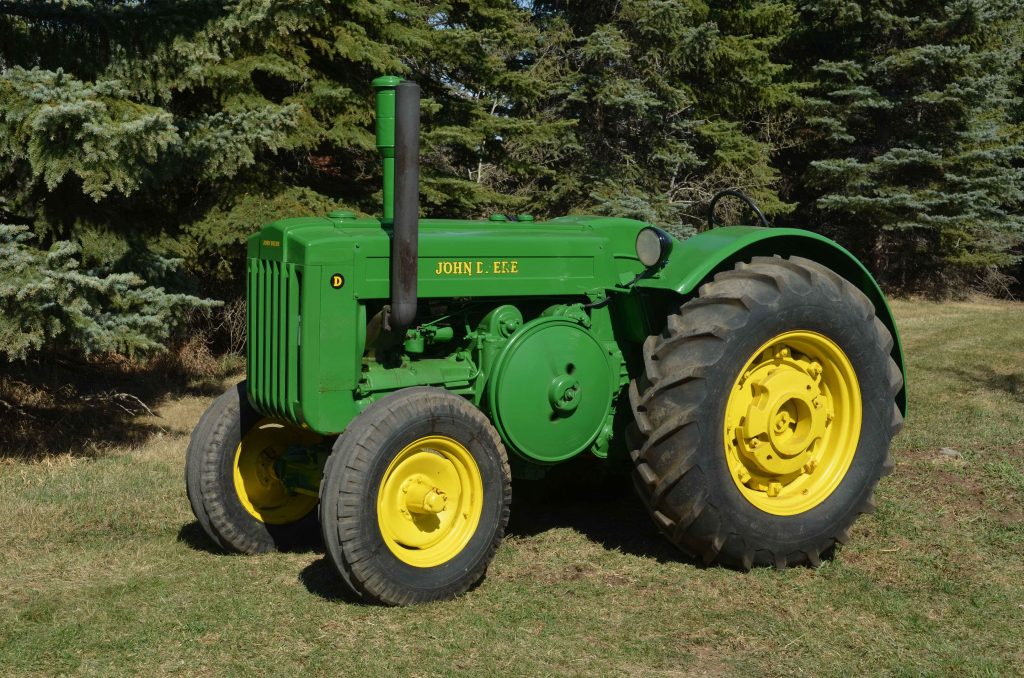 John Deere hired the renowned industrial designer Henry Dreyfuss in about 1937 to re-envision the look of their line of farm tractors. This resulted in essentially a complete redesign of the tractor’s sheet metal now called the “styled” design.

The new styled tractors were released in 1938 starting with the Model A and B. The Model D was one of the last Deere lines to get this new styled look. 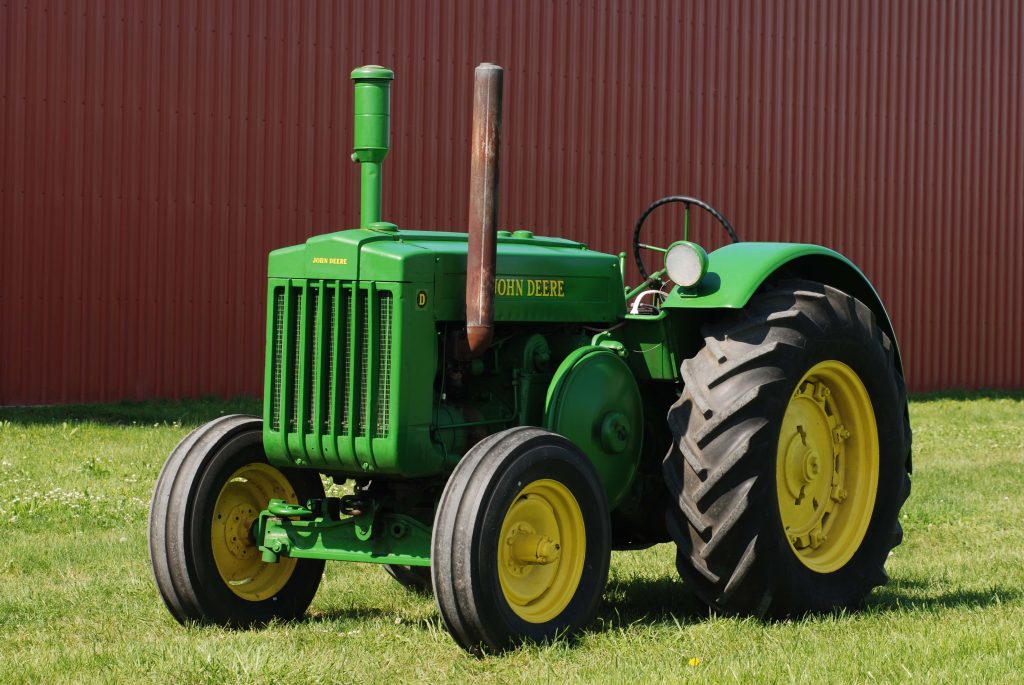 The Styled D had a larger 501 cubic-inch engine Deere introduced in 1927. A popular option was an electric starter and lights. 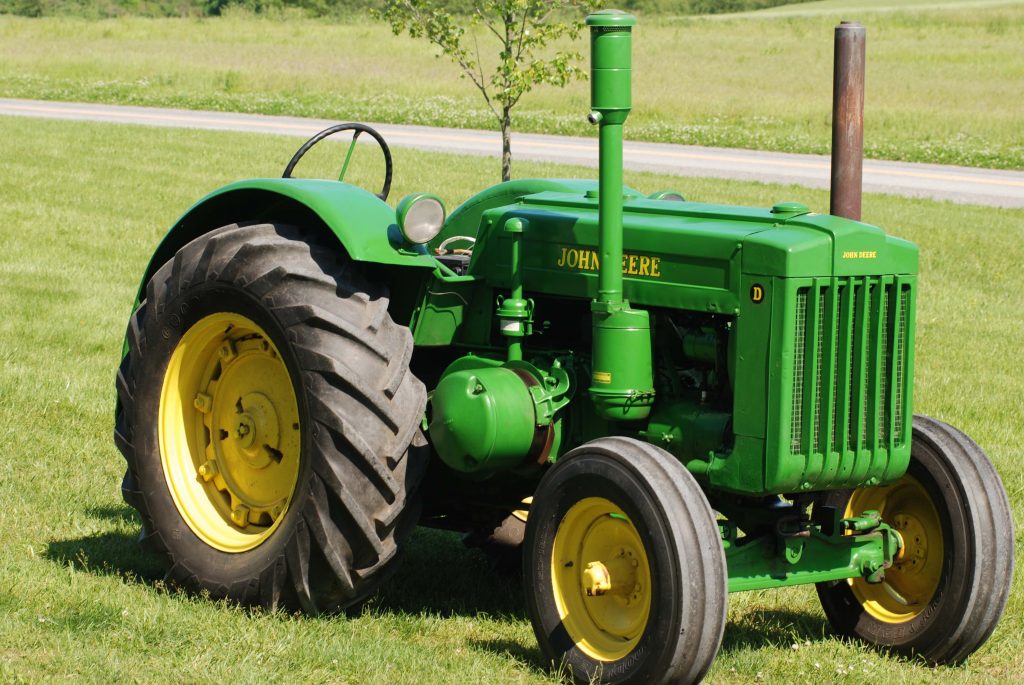 The popular demand was so high that in 1953 when production had officially ended Deere decided to build one last run. The tractors were built in the street right outside the production building. These tractors became known as “Streeters” by collectors. 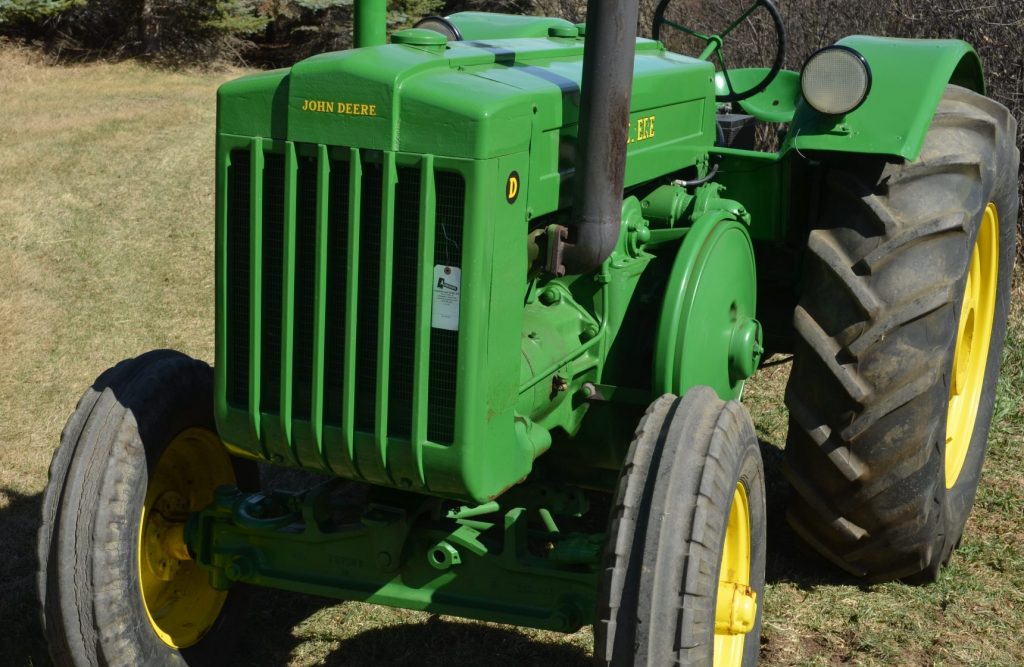 So what is your favorite Model D variation? Tell us in the comments.