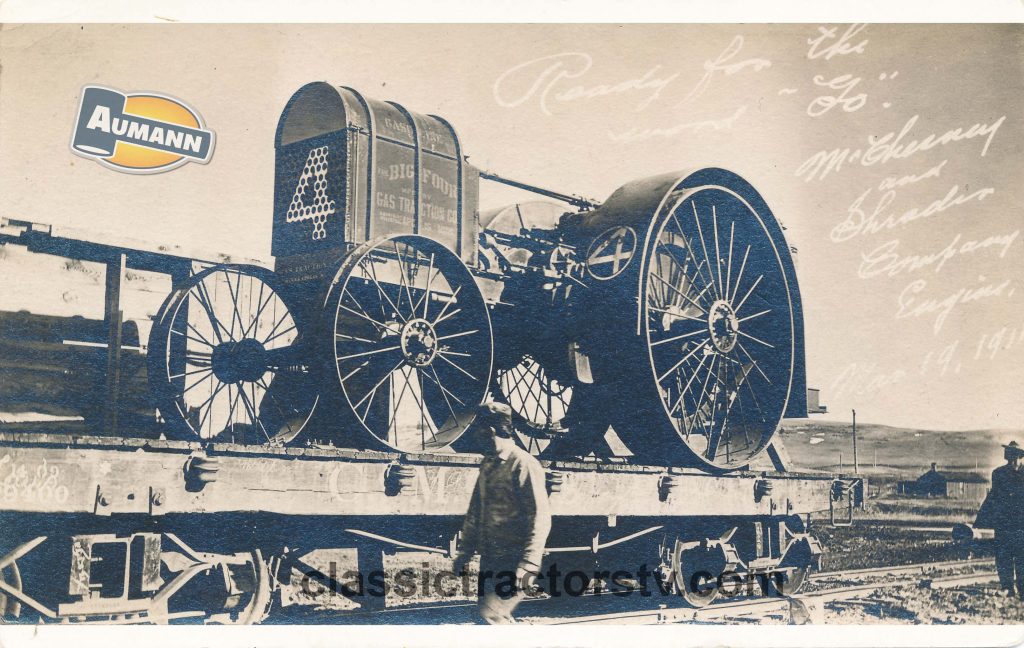 Few antique tractors have the immense scale of the Big 4 Thirty Tractor built by the Gas Traction Company. Indeed for collectors the Big 4 represents the spirit of an era when the large prairie tractors dominated the plains. They bragged in a company advertisement from 1910 that they were “the first and largest builder in the world of four-cylinder engines.” The Big 4 Thirty gets its name from the horsepower, able to produce 30 horsepower on the drawbar and 60 horsepower on the belt. 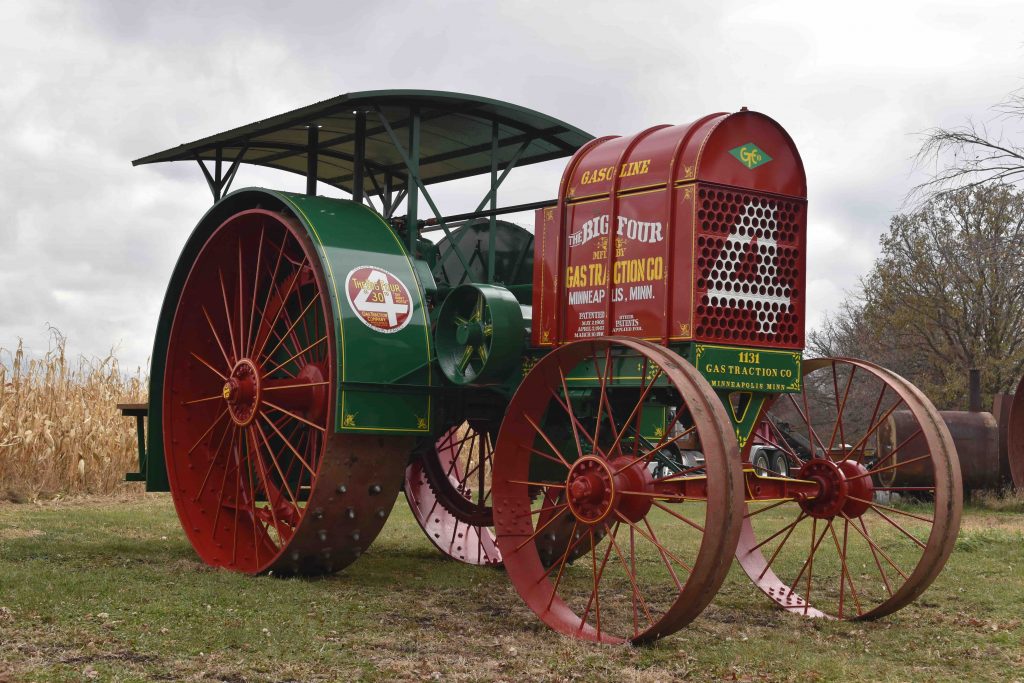 The Gas Traction Company has its origin with D. M. Hartsough who in 1904 built a four-cylinder tractor with a four-inch bore and five-inch stroke. Hartsough met Patrick J. Lyons in about 1905 who was impressed with the smooth four-cylinder engine and the overall tractor design. The two men formed the Transit Thresher Company which was the first four-cylinder traction engine offered to farmers. In 1908 they formed a new company called the Gas Traction Company and a year later took the tname Big 4 as the company trademark. 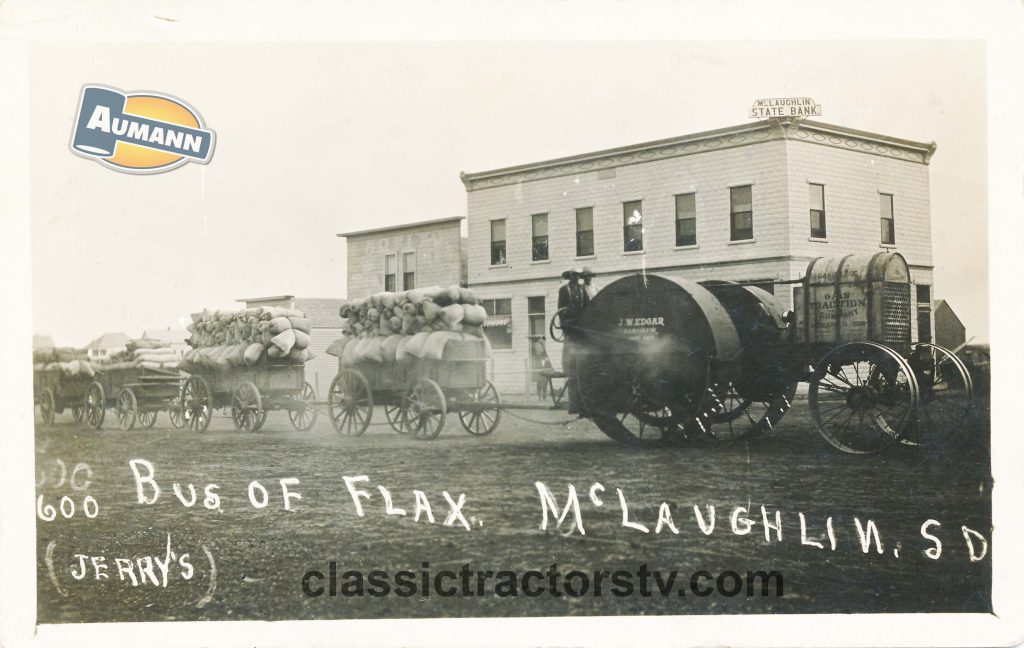 The Gas Traction Company was one of dozens of agricultural manufactures trying to get into the tractor market in the early days of gas tractor development. In the first decade of the 1900s there was a need for larger tractors to break the virgin grasslands of the western United States and parts of Canada. The large tractors included models by International Harvester, J. I. Case, Hart-Parr, Fairbanks-Morris, Rumely, Nicholas & Shepard, Minneapolis and Imperial. 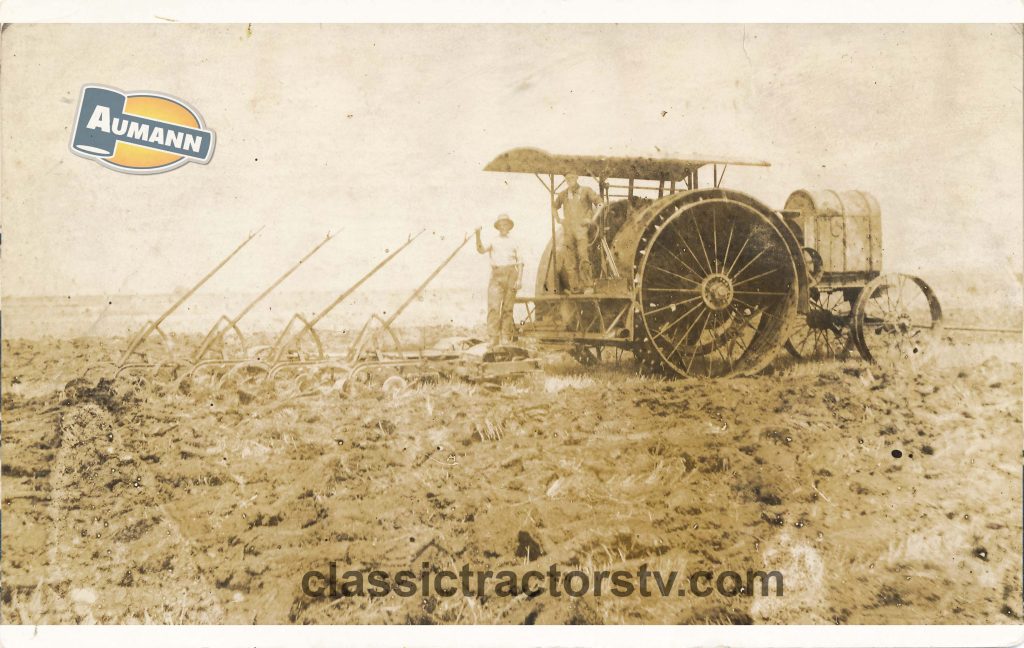 Each company had its own ideas for how the tractor should be designed, but these early models had a few things in common; large steel rear wheels, heavy channel iron frames, and chain steering. Much of this was continuing the basic design of the steam traction engine.

The engines were more varied, from single cylinder to two-cylinder opposed or side by side and larger four-cylinder engines such as the engine in the Big 4 Thirty. It’s not just the size of the Big 4 that’s impressive, but its powerful engine. It’s a headless, four-cylinder, vertical, inline engine, with a 6-½ by 10 inch bore and stroke. Its high tension magneto system was reliable even in adverse conditions.

The Big 4 won a few plowing competitions including First Place Gold Metal for internal combustion engines over 30 hp at the 1910 Winnipeg Motor Contest. The Big 4  pulled a seven bottom John Deere gang plow at the rate of 2.54 acres per hour. It might have been this competition that caught the eye of some John Deere Branch manager. Around the same time some Deere branch houses sold the Big 4 Thirty tractor.

Deere was known for its line of quality implements, but had still not got into the gas tractor market. The company saw the potential of the Big 4 tractor. It may have also aided Deere dealers in selling their line of large gang plows.

The Big 4 was sold till at least 1912 as shown in a Deere dealer catalog from that time. It’s unclear exactly how long Deere sold the tractor, but the end might have coincided with the purchase of the Waterloo Boy Company in 1918. Deere continued to sell the Waterloo Boy tractor until the introduction of the Model D tractor in 1923.

Few of these Big 4 thirty tractors survived, either traded in for smaller modern models or dismantled during the World War 2 scrap drives. For many years there were only about 20 complete Big 4 Thirty tractors that survived. At one time it was thought there was more rolling chassis than complete existing tractors. That is until more recently when a group of collectors decided to build more.

Al Serverson of Blooming Prairie, Minnesota was one of these collectors. Al had always wanted to own a Big 4 Thirty, but obtaining a complete running model wasn’t possible. When he had the chance to buy the remains of one in 2009 he jumped at the opportunity. 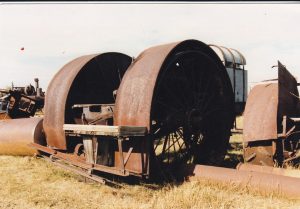 Al purchased a Big 4 Thirty parts tractor from the estate of Morris Blomgren in Siren, Wisconsin. Morris passed away on November 1, 2009 at age 92. He was a long-established collector of all kinds of antique machinery and had amassed quite a collection. 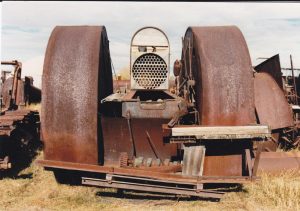 Morris’ Big 4 Project came from the Reynolds Museum near Edmonton, Alberta. Morris had corresponded with the museum for a couple of years before buying the tractor in 1988 for $5,900 US dollars. The tractor was missing the engine, transmission, pinion gears and many of the small parts. Morris did some work on the project which included getting new pinion gears. The tractor chassis remained in his yard near his driveway until the time of his death.

Since no parts for these tractors remain, Al had a big task ahead of him building an entire engine assembly and transmission from nothing. This type of undertaking wasn’t without precedent. Harold Ottoway of Wichita, Kansas set out on a similar endevor in the early 1980s. Harold found the crankshaft for a Big 4 Forty Five, the six-cylinder version of the Big 4 “30”. Harold started with nothing but a crankshaft and built the only known example of the Big 4 Forty Five Tractor.

Harold’s search led him to the White River in Kadoka, South Dakota where he found the remains of a Big 4 Forty Five laying on its side in the river bank. He and a group of other collectors were able to pull the remains of the crankcase and transmission from the river. Using these pieces he was able to reconstruct, make patterns, pour new casting and rebuild the Big 4 Forty Five. This tractor now resides in the John Tysse collection in Crosby, North Dakota who was instrumental in completion of the project.

Al had a little to go by when starting his project. Al had restored the Big 4 Thirty tractor owned by the Little Log House Pioneer Village in Hastings, Minnesota in the mid-1990s. He borrowed this tractor and brought it back to his shop to disassemble, measure and copy parts. 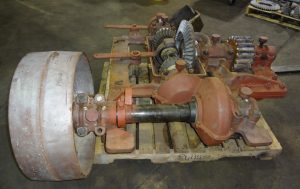 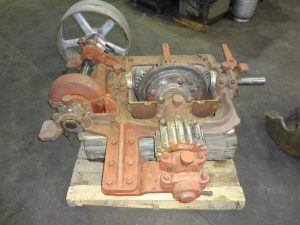 They built wooden patterns, casted new upper and lower crankcases and all of the engine parts including: the pistons, connecting rods, cylinders, manifolds and the crankshaft. Every part of the transmission was also cast.

Al noted that, “The process was much more difficult than could have been anticipated.”

The cylinders proved the most problematic part of the project. The cylinders are headless, unlike modern engines with a removable head which is sealed with a gasket. Al recalled, “It was the complexity of it, with the water jackets and valve chambers and so on. There’s just so much that goes on in cylinders. This particular cylinder is a headless design, so the valves and head are part of the casting. That means a need for more cores and if anything moves or anything happens, you get a bad part. When you pour metal, gases build up and need an escape route, which is too often blowing a hole in the casting. So the cylinders were doubtless the hardest part.” 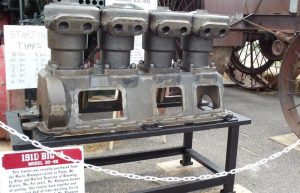 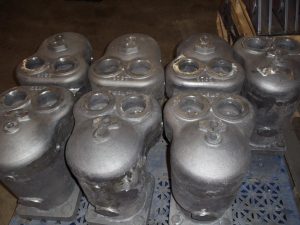 Al used two different foundries and after several failed casting was finally able to get enough usable cylinders. Along with the castings and all that machining, Al also made new fenders for the Blomgren tractor and built not just one, but five radiators for the Big 4. 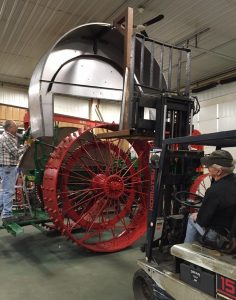 Al personally put together not just one, but two Big 4 Thirty tractors at his shop in Blooming Prairie, Minnesota. Along with the Morris Blomgren tractor, Al also purchased a 1908 Big 4 Thirty from the Brett Kemper estate. While putting his two together, Al assisted about a dozen different collectors from four different continents with their Big 4 Thirty projects. In the end Alan helped to assemble five complete Big 4 Thirty engines.

The finished Blomgren Big 4 tractor is an amazing site. When you walk up to it, the first thing you notice is the scale and its tall rear wheels some 8 feet, 3 inches in height. It’s a fantastic restoration with Al’s attention to detail and craftsmanship shown throughout. It’s hard to believe that the engine and transmission are all brand new. If you didn’t know it you’d swear it was all original.

In 2021 Al decided to part with the Blomgren Big 4 Thirty. The tractor will be sold on the Aumann Vintage Power Pre-30 Auction on April 24, 2021 in Nokomis, Illinois. It is only the second time a Big 4 Thirty tractor has sold at auction in the past thirty years.

For more information about the Blomgren Big 4 Thirty selling on the Pre-30 Auction visit, aumannvintagepower.com 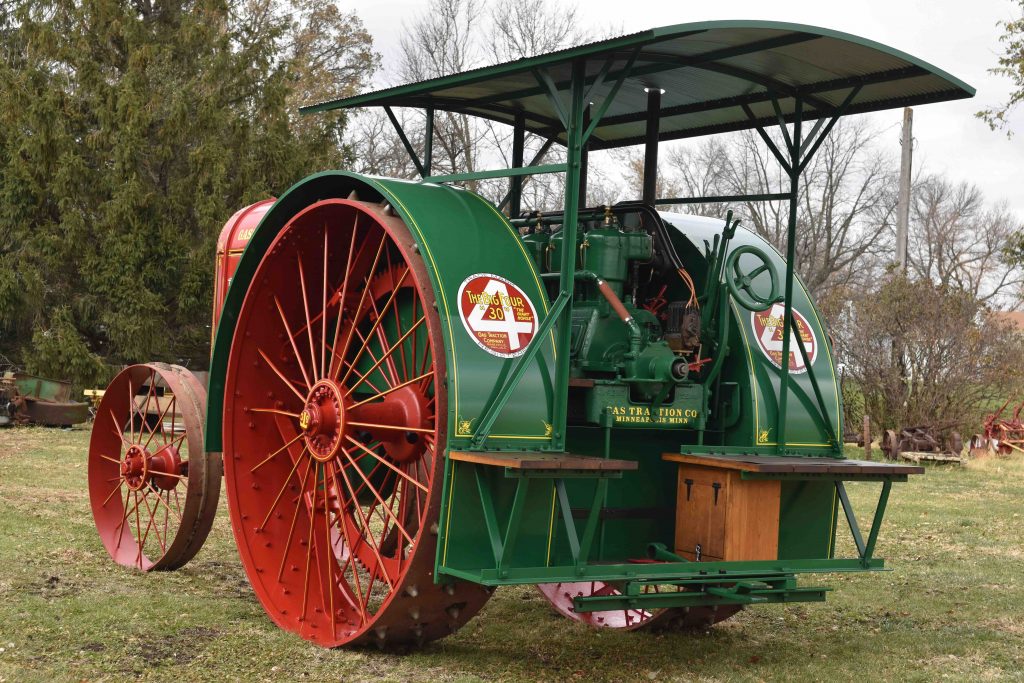 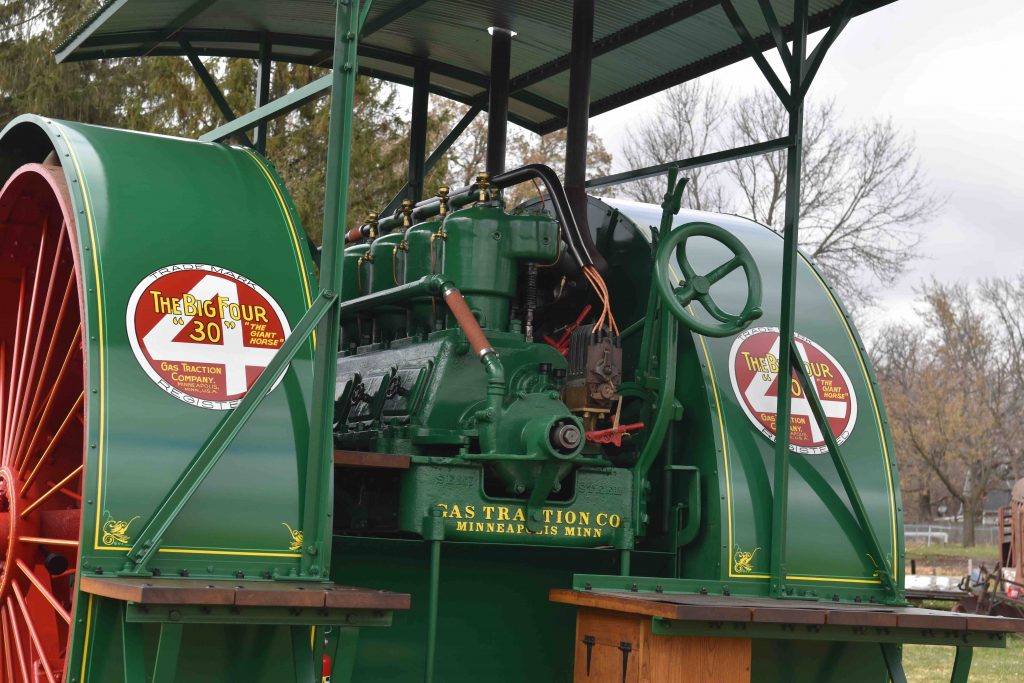 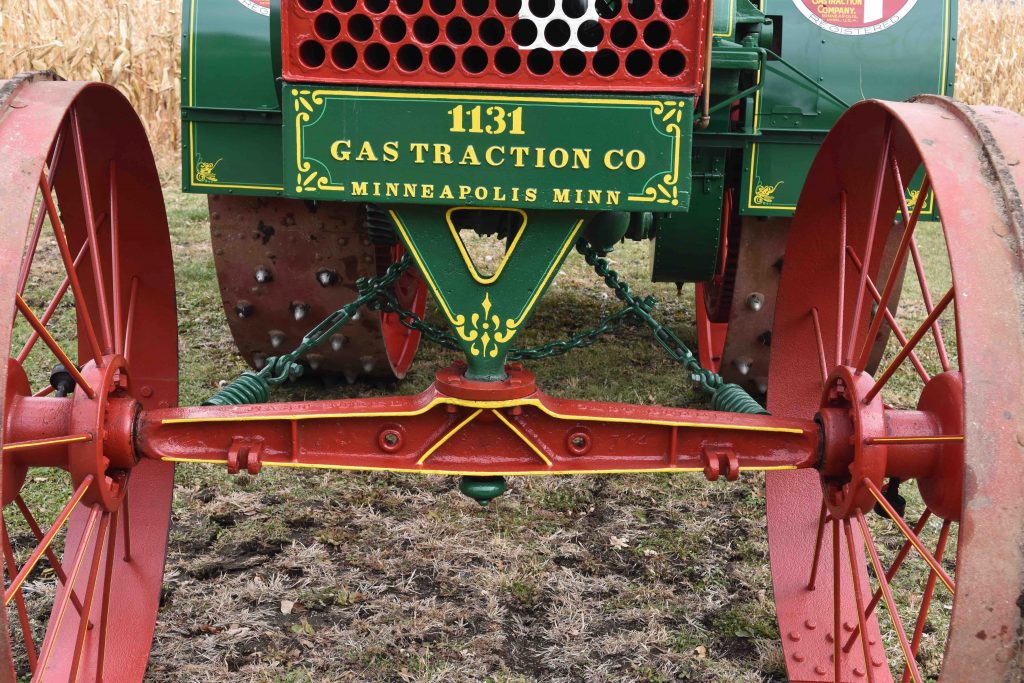 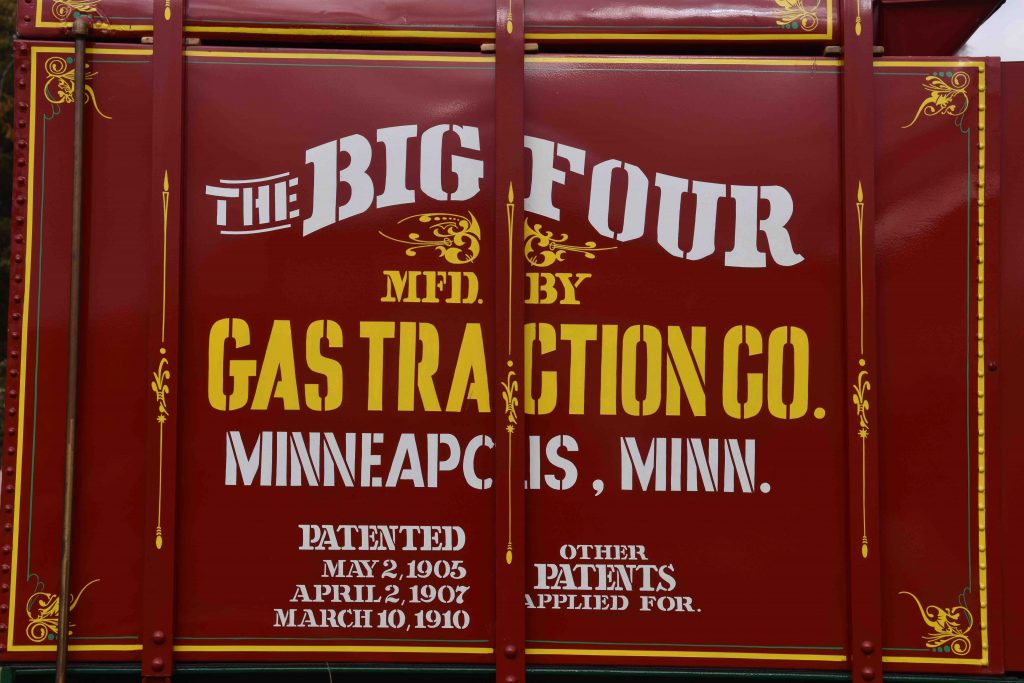 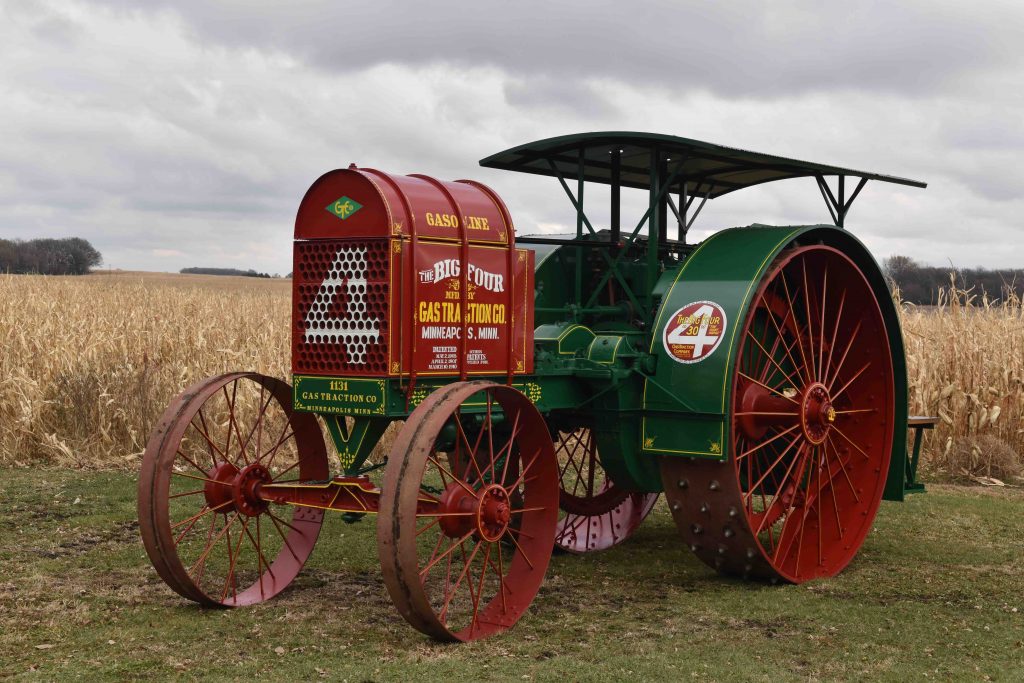 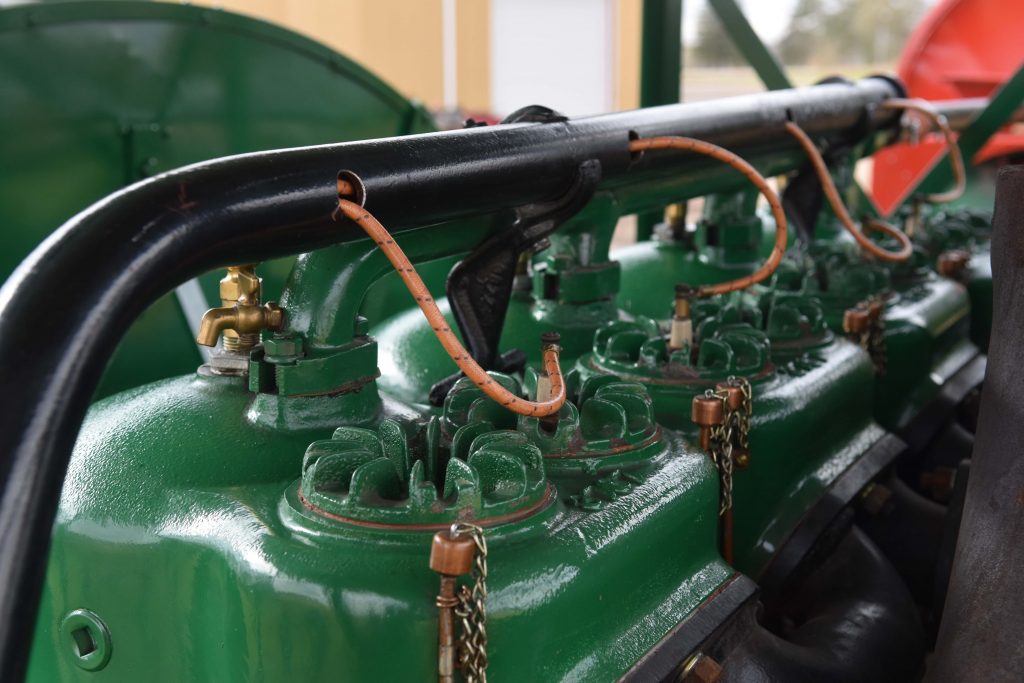 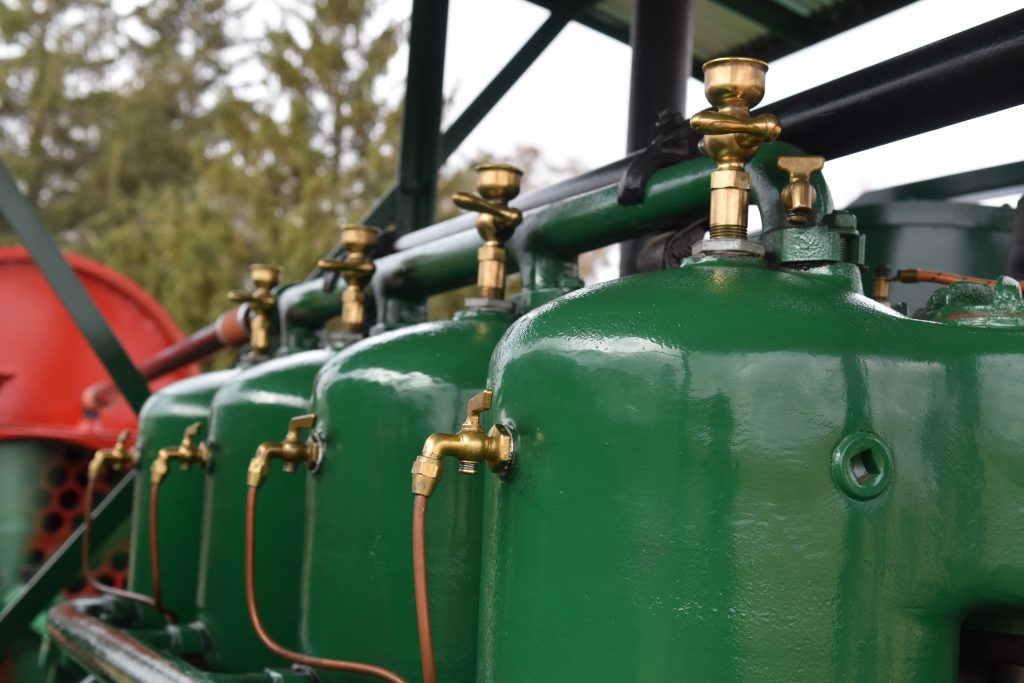 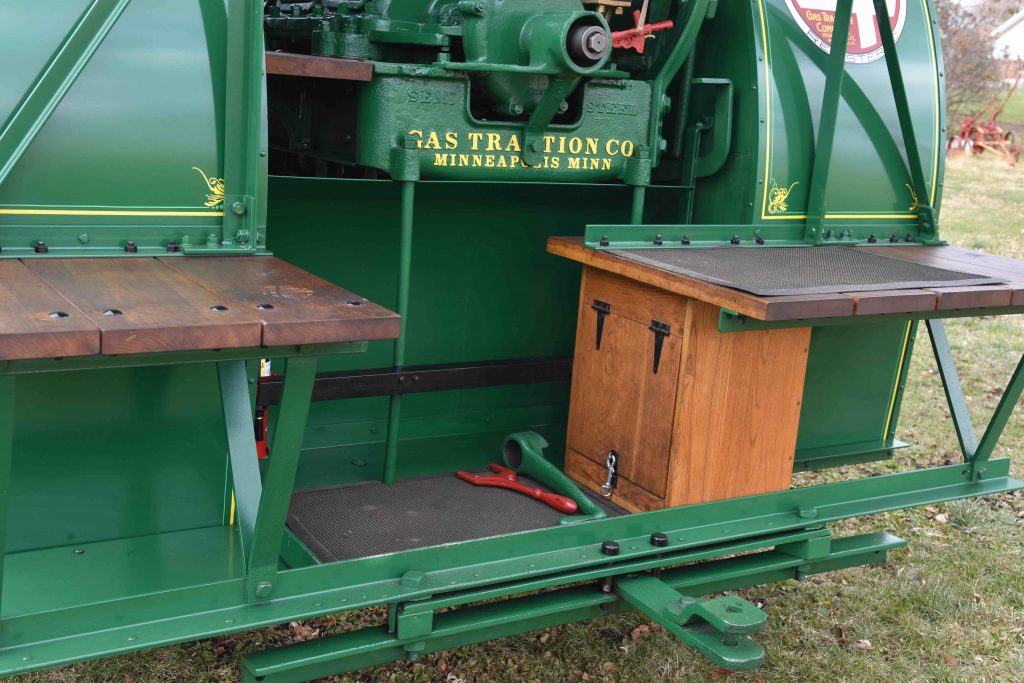 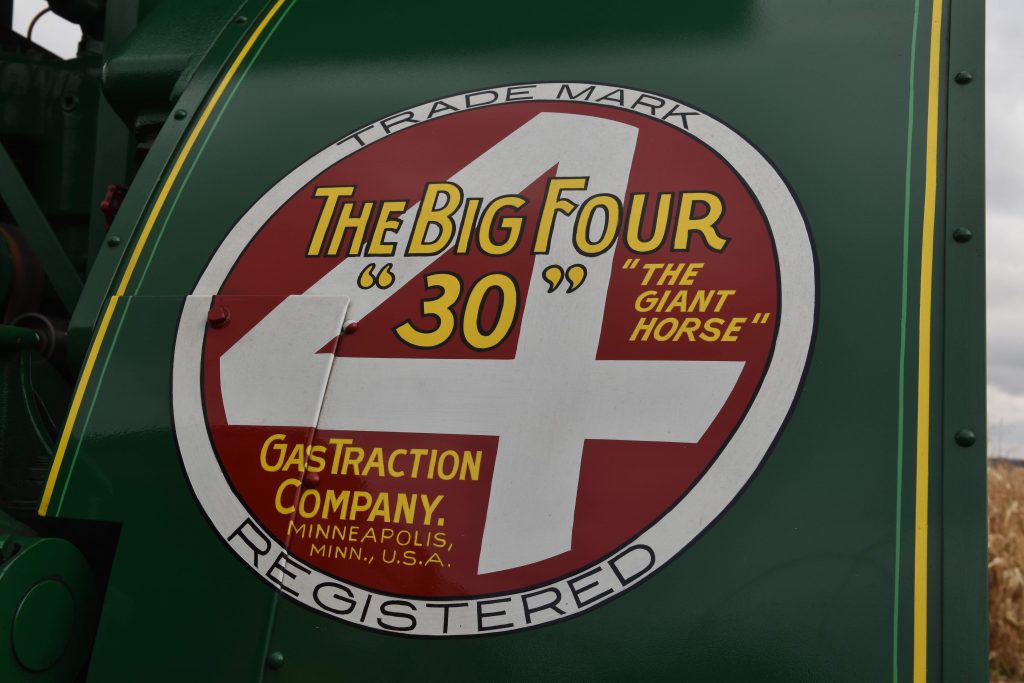 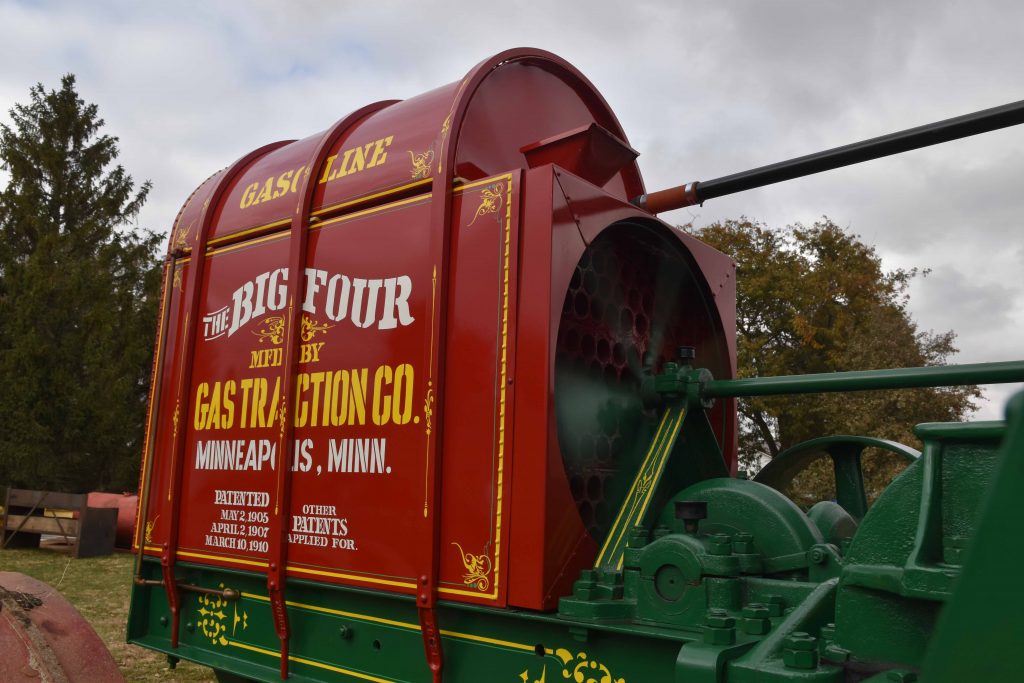 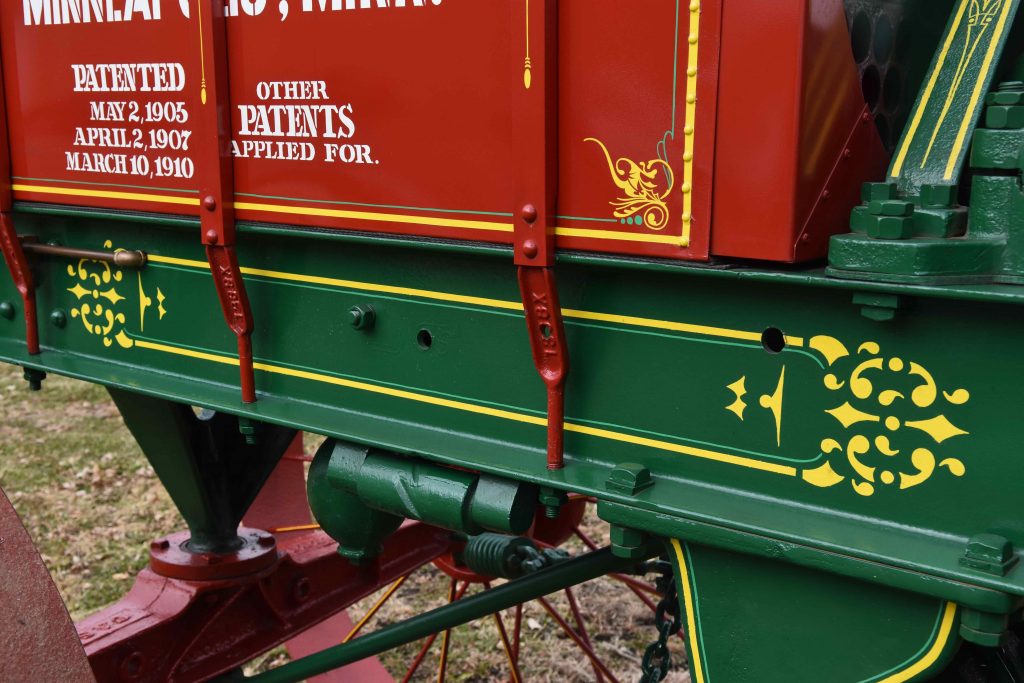 This Springfield Model A is one of many great piec

What are the top ten four wheel drive classic trac