A John Deere Collection That Brought A Family Together

I traveled with Roger Johnson on a warm August day to the small town of Chebanse, Illinois. Roger was meeting with David Jepson, a long time John Deere collector and friend. David had decided to sell some pieces from his father’s collection.

David and his father Dennis have collected everything John Deere for decades. Dennis passed away at the age of 80 in June, 2021. He was a charter member and past president of the Thee Old Time Farm Show in Bradley, Illinois. For many years Dennis ran their steam powered sawmill. During all that time he never stopped collecting and preserving agricultural pieces from the past.

For David the passion for collecting started as a teenager when he bought vintage farm toys at tractor shows. While David was purchasing tractors, his father was buying all types of John Deere memorabilia. 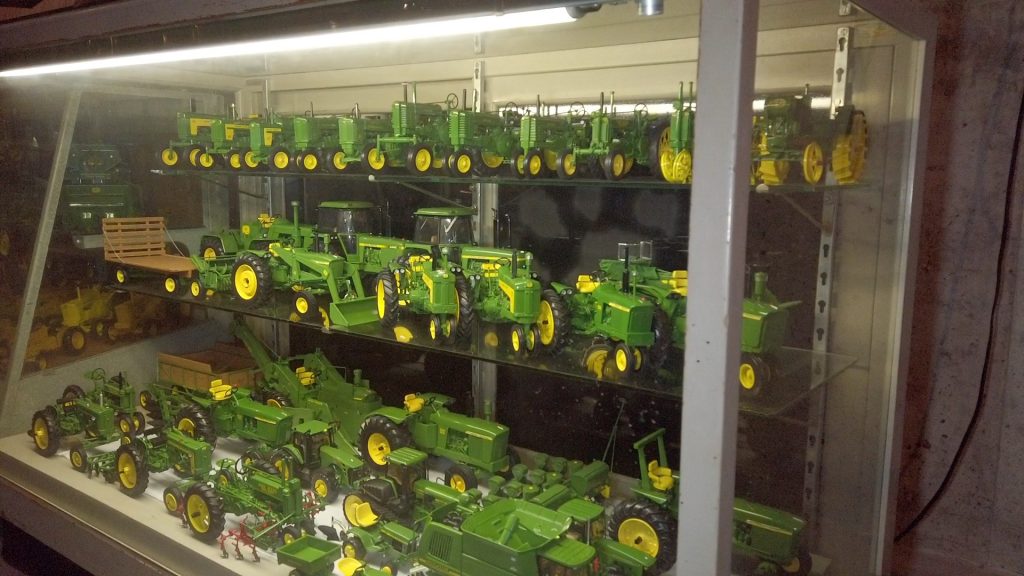 “Every birthday or Christmas I was given a John Deere farm toy. I would go visit my grandfather’s farm on the weekends, so my dad could help with the farming. I’d go into the farmhouse so I could play with all those toys from the 1950s that were still in really good condition,” David said.

“When I was a young kid 13 or 14 years-old we started going to toy shows. I’d be looking at the toys because that’s what I was into. I’d look over at my dad and he would be looking at cast iron wrenches, tape measures, lighters and all kinds of collectibles. I said, hey we’re at a toy show let’s look at the toys. He said, don’t you worry about it, I know what I like and this is fun stuff too,” David said. 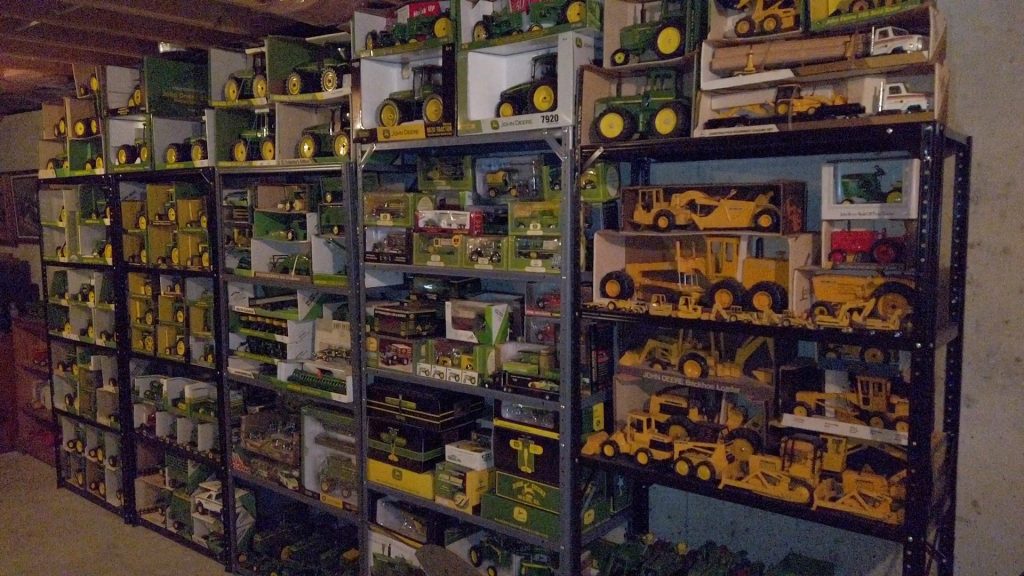 As David got older his appreciation for John Deere collectibles grew and he started collecting similar items with his father. There are some great pieces in the collection from new old stock parts, early new in the box farm toys, signs, great advertising pieces like tape measures, rain gauges, salt and pepper shakers and lighters. 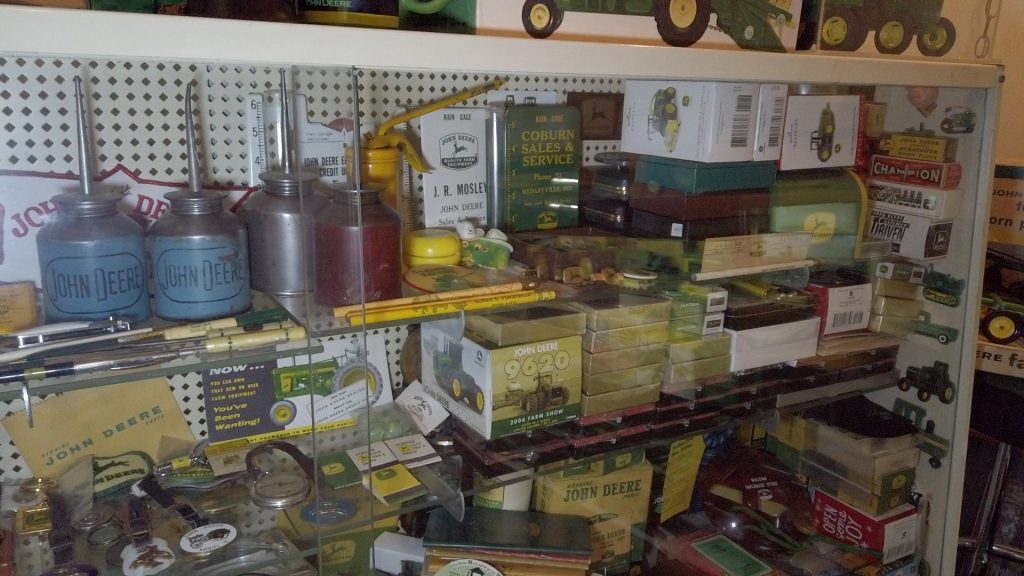 “My dad really steered me in the direction of the smaller items and I learned early on to enjoy the cans, tape measures, and lighters. They display really nice with the toys. And it was nice to know that those were dealership giveaways, they were actually from the dealer. A lot of them were of local interest to us,” David said.

It was entertaining to watch Roger and David get excited as they picked out pieces from the showcase and decided which items to sell on Roger’s upcoming Premier Deere Auction.

We were in a bedroom that had been converted into a showroom. Three glass display cases lined the walls and were packed with all kinds of John Deere memorabilia, spanning 80 years. David opened the closet to pull out some straw hats and pith helmets, and it was stacked from floor to ceiling with collectibles.

This wasn’t the only place the collection resided. Next we headed down a flight of stairs into the basement where we were greeted with rows of shelves stacked floor to ceiling with new in the box farm toys. The back wall was lined with vintage John Deere pedal tractors and showcases filled with all kinds of period Deere items. 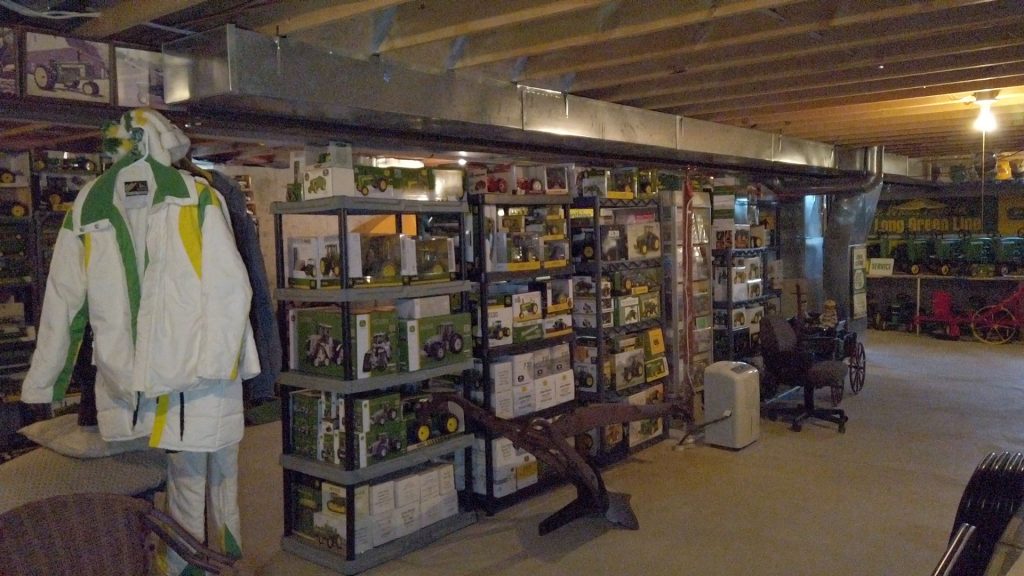 One of the first things Roger saw was a great original walk-behind plow. David and his father purchased it at the Elliott Auction in Canton, Illinois. Roger recognized it  and come to find out he bid on the same plow. Such is the small world of the hobby.

The plow is in such good condition, they kept it in the basement. David wasn’t sure if this is an item he’ll sell at auction. Roger and David looked at other items, literature display racks, new old stock tractor & engine parts, pedal tractors, vintage hats and yes farm toys. 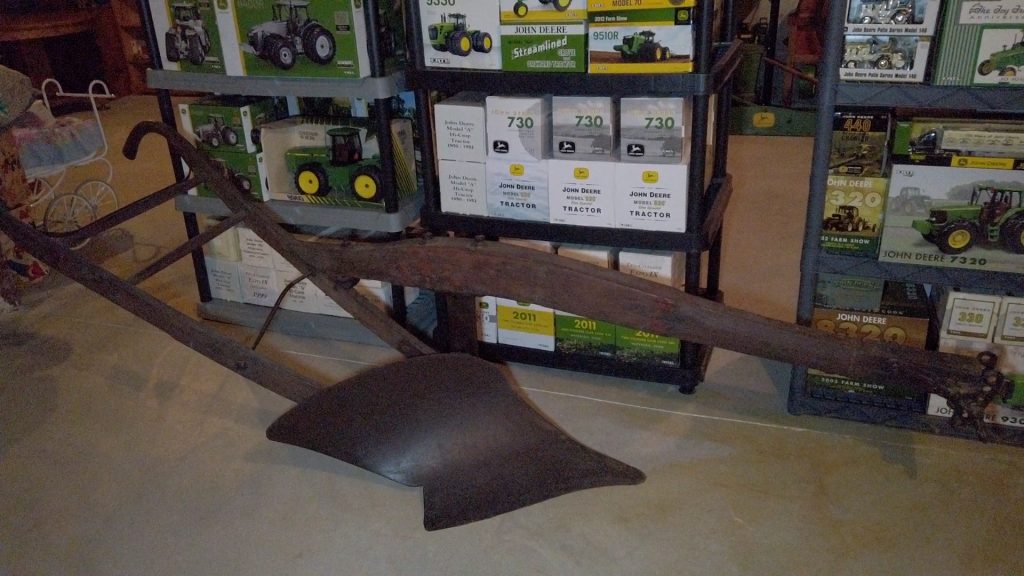 Talking with David you get a real sense that these aren’t just collectibles, they are memories. Gathering up all these items gave father and son a chance to bond and share a common interest.

I asked about the farm tractors and David took us outside to check out their collection. We entered a machine shed where both walls were lined with John Deere tractors. Some of the choice pieces included a John Deere GP wide tread, a spoked flywheel Model D, and several original paint tractors. The collection spanned from 1930s unstyled letter series to the 1960s New Generation models.

The tractor collection started with a 1938 John Deere Model A his grandfather bought new in Chebanse, IL. It was the tractor his father Dennis learned to drive on. 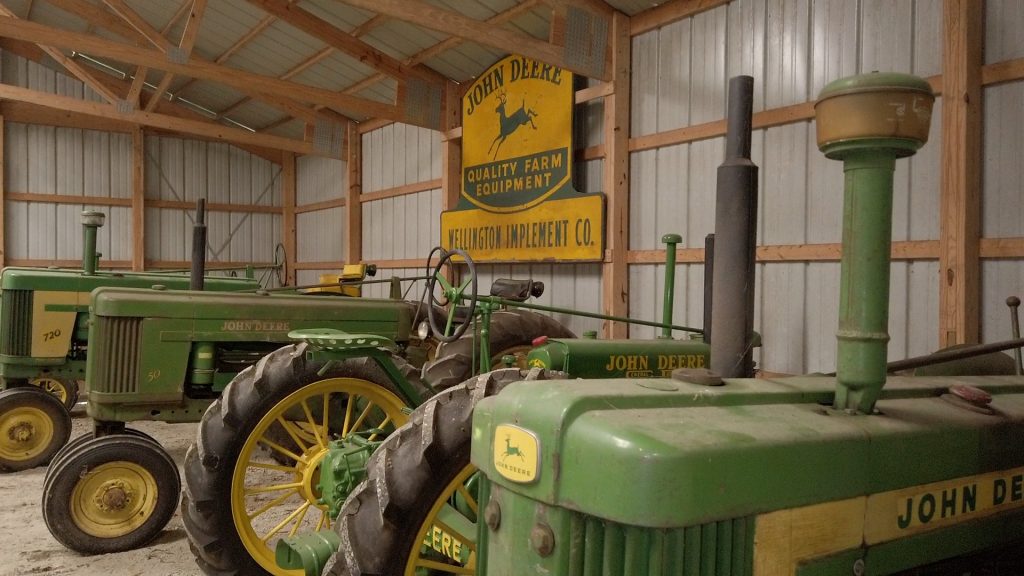 “In 1961 they had traded it off not realizing it was a family heirloom at the time. By 1970 my dad got the idea, He said, You know I’d like to get our old original family tractor back. After seven or eight different owners and many phone calls he finally tracked it down. It had some parts missing and was actually left for scrap down near the river.

When he actually physically laid eyes on the tractor, the owner of the tractor at the time said, Hey I don’t actually own it. I almost scrapped it, but I ended up trading it for a hog. And I don’t mean a Harley-Davidson hog, I mean a hog like a pig. So he said I don’t physically own it, but I can give you the guy’s name and maybe you can buy the tractor from him.

Long story short, my father acquired the tractor, a 1938 John Deere A that was his original family piece. He got it home, got it running and painted it. One of my favorite pictures is I’m two years-old standing next to it out in the farm yard here. That’s what started his passion for the two-cylinder tractors and mine also,” David said. 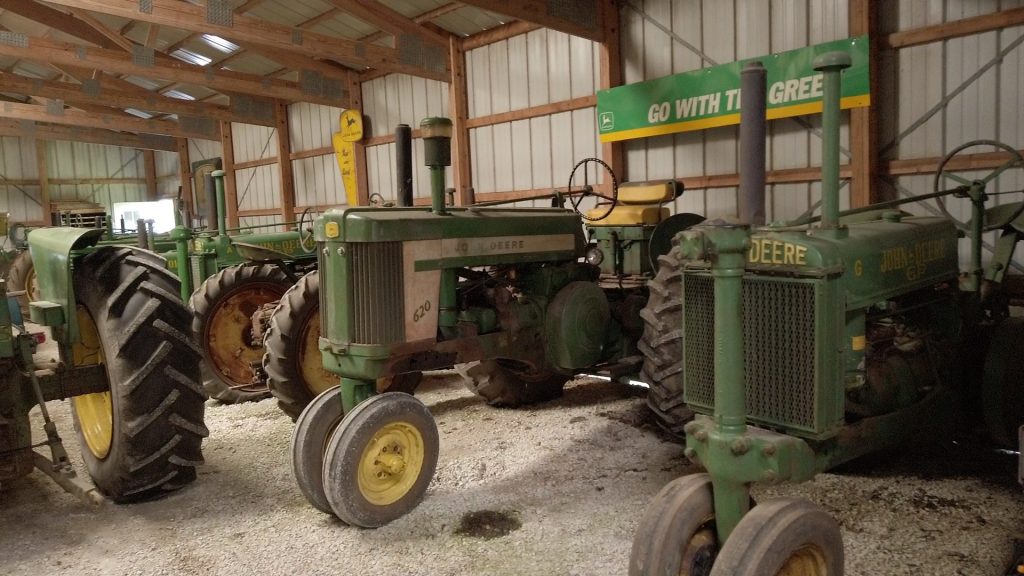 The 1938 John Deere A isn’t the only item David knows he won’t sell. There’s also a 190 Allis-Chalmers pedal tractor.

“That tractor was mine when I was a child. My father went to Tractor Supply to get me a 4020 John Deere, but I guess due to their popularity they were sold out. And because he used to work for an Allis dealership and at the time my grandfather was farming with some Allis tractors, he got me the 190 Allis,” David said.

But at one time, it almost left the collection.

“Years ago before I understood the importance of having something from your childhood, I looked at it as just an Allis-Chalmers pedal tractor. I had a chance to trade that towards some John Deere new in the box farm toys. The guy was in Florida. He wanted the pedal tractor and I wanted his farm toys. We determined that shipping the pedal tractor wouldn’t be cost effective, so he said just mail me the money I want for the boxed toys. At the time I was disappointed, that was costing me money, but as it turns out I kept my pedal tractor and I still have it and I wouldn’t sell it for ten times that money now,” David said. 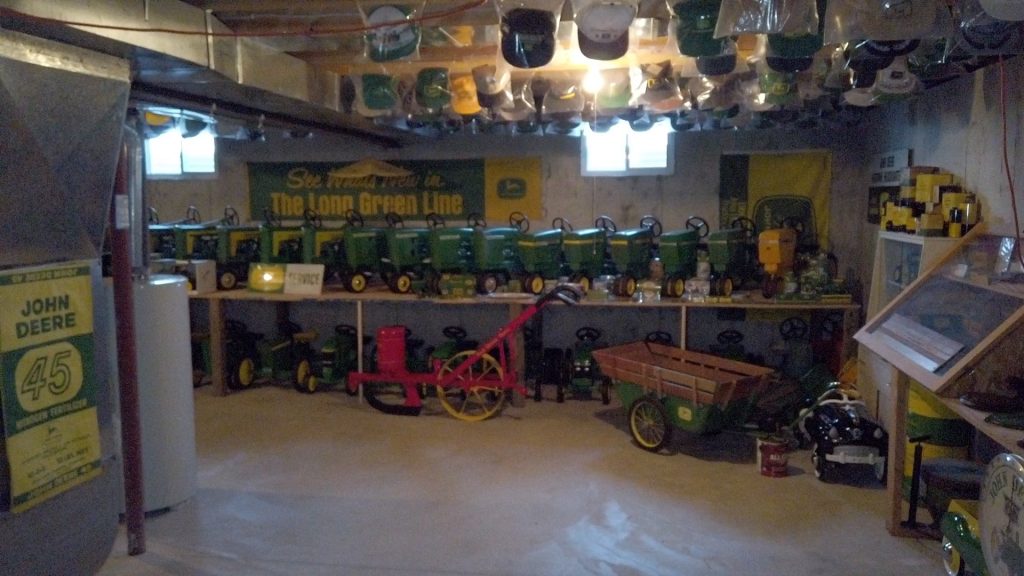 Whether we like it or not, time moves on. We’re just caretakers of these pieces and all we can do is enjoy them and preserve them for future generations. Now some new collectors will enjoy these pieces David and Dennis took years to acquire.

Part of the Jepson collection sold on the Premier Deere III Sign, Toy, Literature & Memorabilia Online Auction on December, 5, 2021. The remainder of the collection will sell on April 3rd & 4th, 2022. For more information visit, https://www.aumannvintagepower.com/ 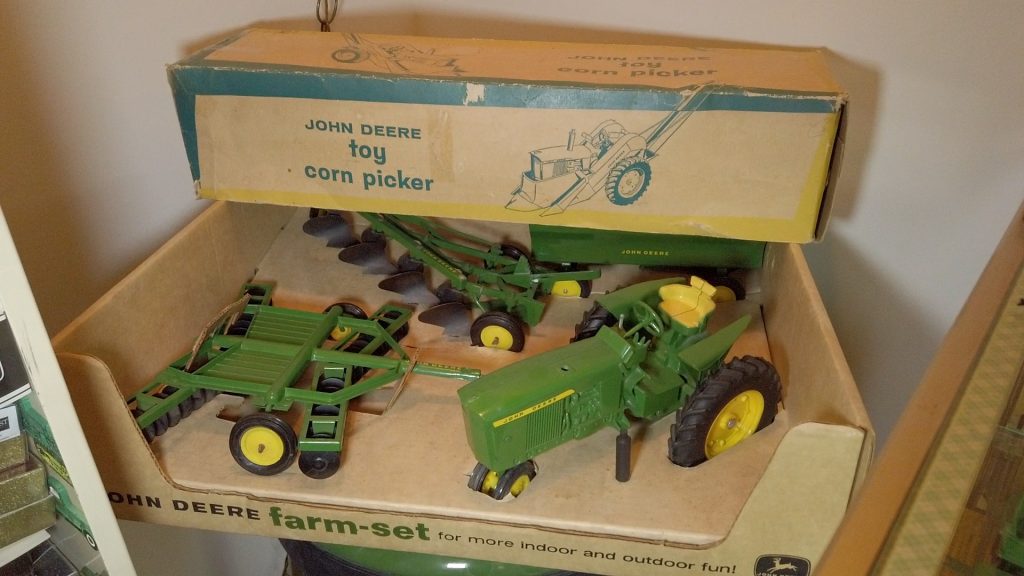 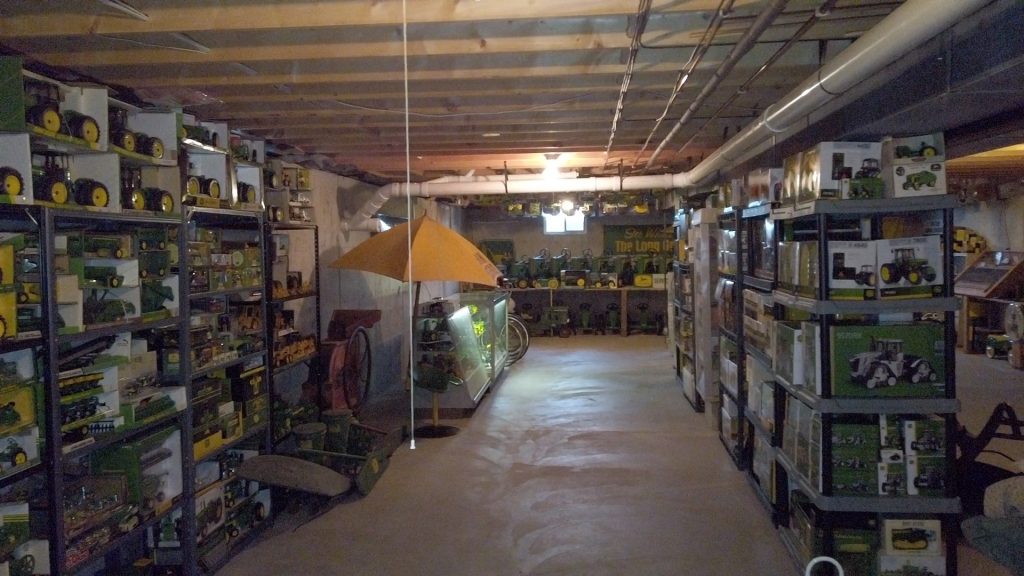 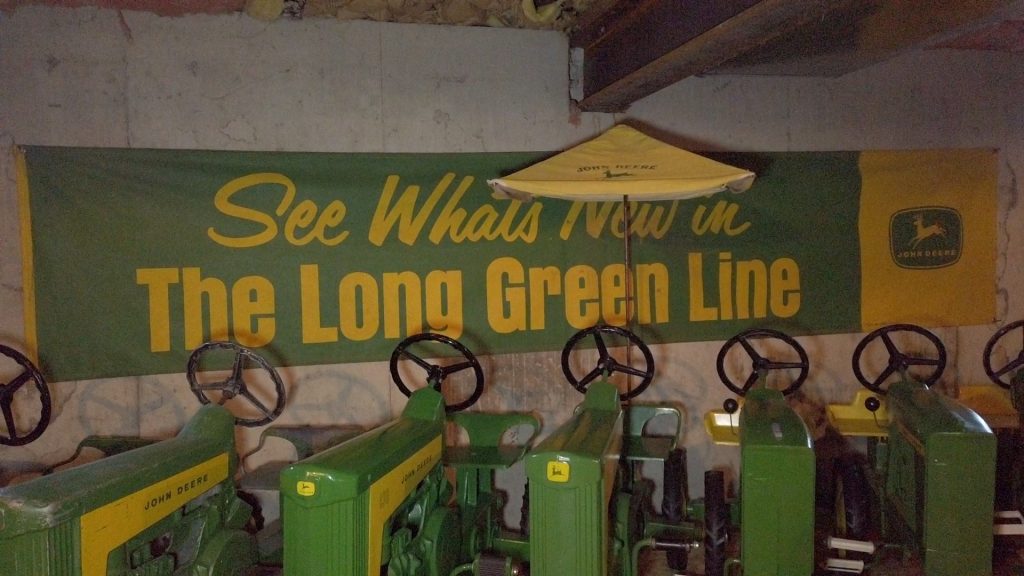 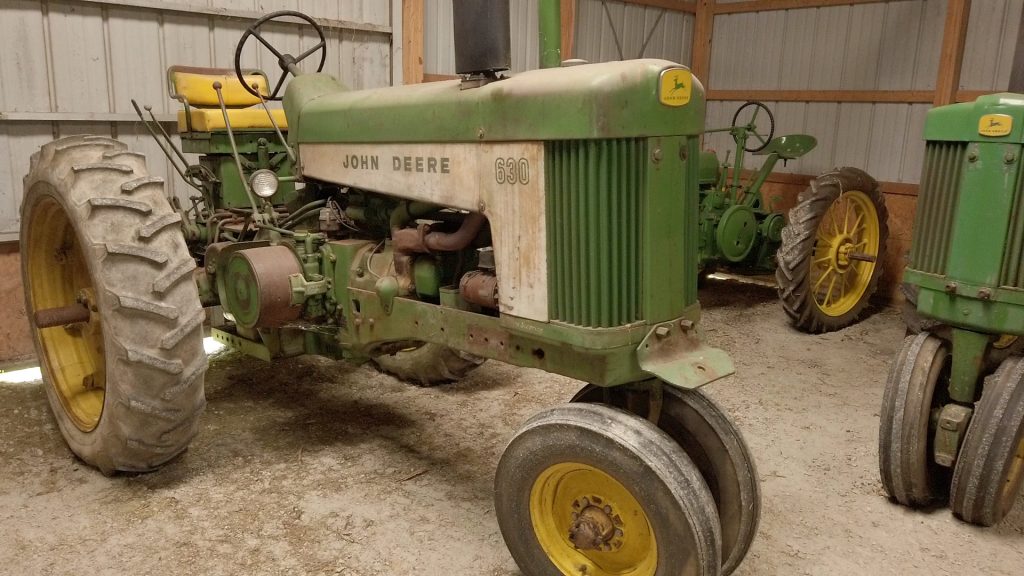