Not Your Average Avery Steam Engine

I recently had the pleasure to tour the Virgil and Phylis Litke Collection near Marion, Kansas. Virgil and Phyllis were married 71 years and it was as much her hobby as it was his. As their children said, it was something that brought them closer together.

Virgil and Phyllis passed away in 2019 leaving behind a collection that took a lifetime to accumulate. On July 23 and 24, 2021, the collection sold at auction with Aumann Vintage Power.

Virgil was one of the true pioneer collectors of the tractor hobby. As a family man and a person of admirable faith, he always greeted you with a smile and a trip to one of his buildings. It didn’t matter how many times you’d been there, you always saw something new and got to hear a new story. Collections like the Litke’s are waning as these pioneers leave their legacy for the next generation.

The family collection contains dozens of antique tractors, steam engines and farm equipment from our agricultural past. For steam enthusiasts there’s one engine you can’t overlook. If you’re not familiar with Avery steam engines you’d probably just walk on by, but this Avery return flue is more than it seems.

Glen Litke, son of Virgil and Phylis gave me the rundown on this deceiving steam engine. Glen restored his own Avery 20 horsepower return flue over a decade ago.

“For 30 years dad worked on acquiring this tractor. He knew there was an Avery farm close to Sterling, Kansas about 70 miles straight west of here. You can still see a big metal sign that says Avery. I was just on that farm last year. There was a whole nest of Avery tractors there, mostly the gas tractors, but this one steam engine was there and Dad tried to buy the tractor,” Glen said. 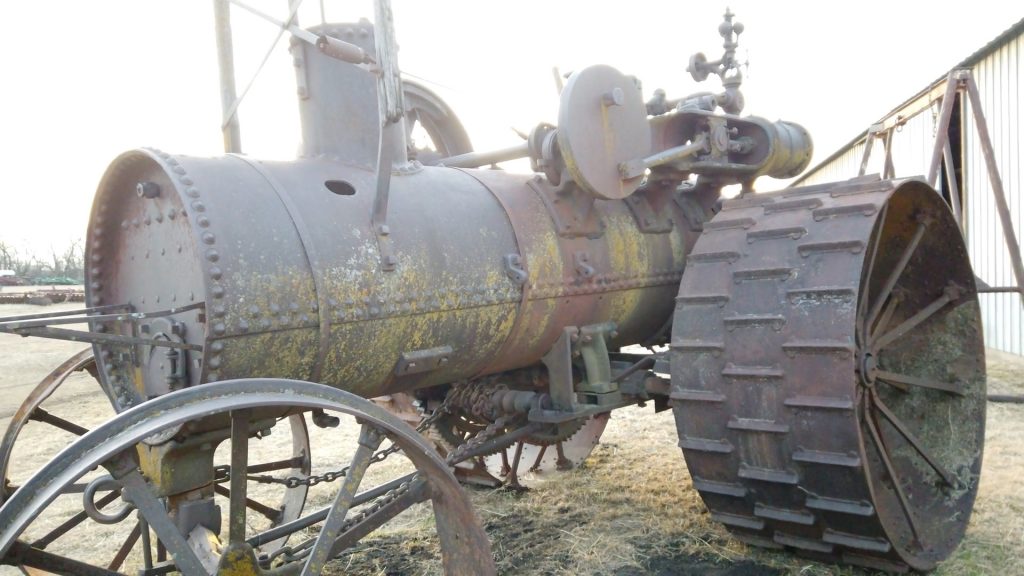 Avery had two testing and proving grounds both located in Kansas. The first was on the Mahoney Ranch near Bunker Hill, Kansas. The Mahoney’s had a big operation and ordered two of the largest Avery undermount steam traction engines before the first one was ever built. This must have caught the eye of Avery who decided they had the perfect place to test their new products.

The second testing site was known as Averyville near Sterling, Kansas. This was the location of the Litke’s Avery return flue engine. Over the years the other tractors at the stie were gathered up by collectors, but the owner would not sell the steam engine.

“So for 30 years he kind of kept asking the guy, do you want to sell it, no, I don’t want to sell it. Then somebody passed away and the estate sold and the land sold and the guy that bought the land was from out east and he came here to start farming in Kansas,” Glen said. 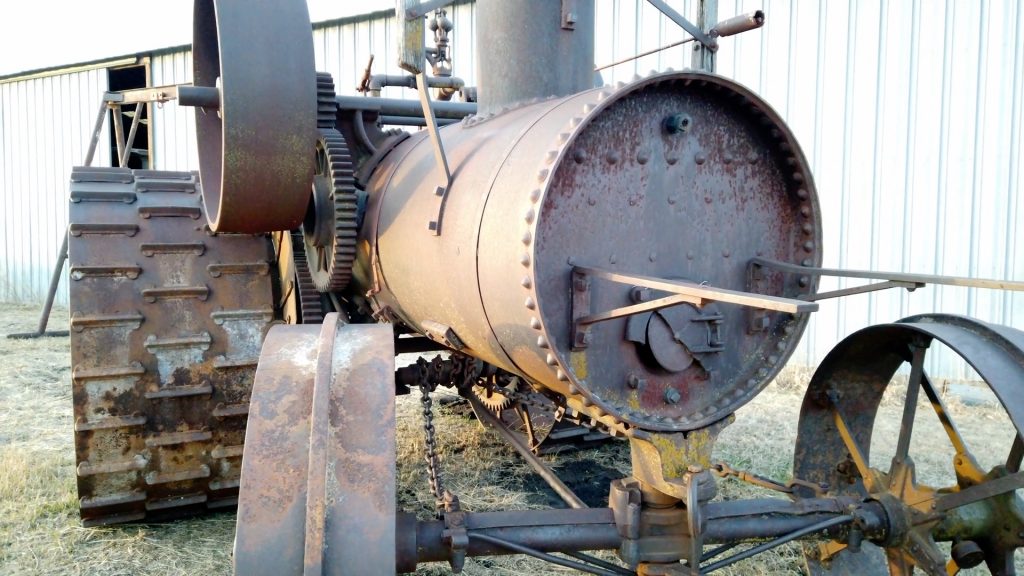 Virgil found he had a new person to negotiate with. This time he was able to make a deal and brought the engine back home where it sits today. Glen grew more interested in the engine after restoring his own Avery. They started looking it over more closely and found a few differences.

“We start measuring and it’s the very same boiler, the very same flywheel, everything is identical to my 20 horsepower, but everything underneath the boiler is beefed up, the rear tires are taller and wider and heavier. The axle is heavier. These wheels have a third row of lugs and whereas my Avery has two rows of lugs. The crank disc is just a few inches bigger. That’s the only difference on the engine.” 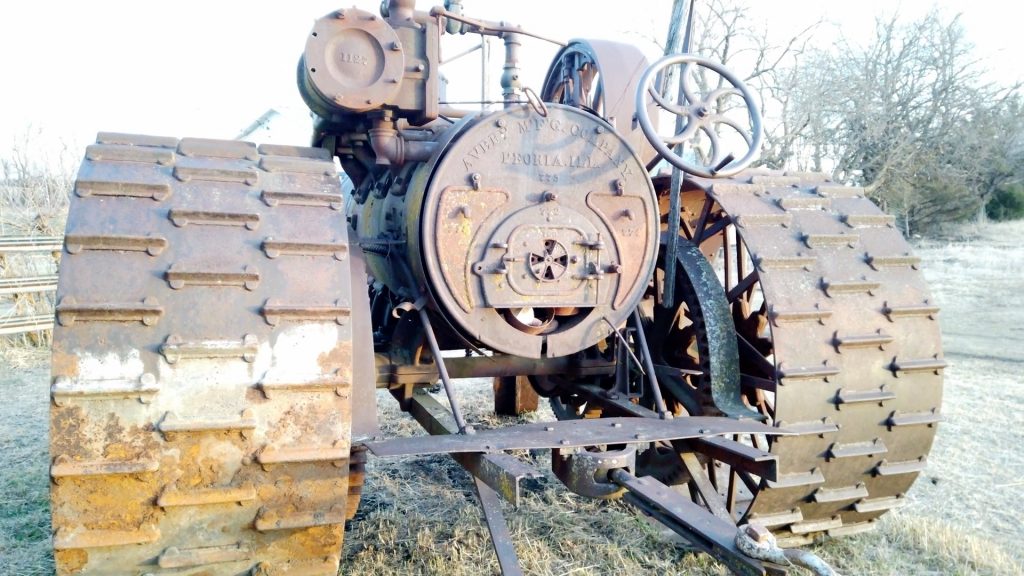 So father and son did their research, but soon discovered there was nothing to find. They couldn’t find any record of the steam traction engine. It was like it never existed. They knew the tractor came off the Avery Farm, thinking that might have something to do with it.

Forrest Pence from Harvard, Nebraska was another pioneer collector who started gathering up tractors in the 1950s. By the late 1960’s he owned over 40 steam engines and dozens of early gas tractors. He had a wealth of knowledge that few possess today. 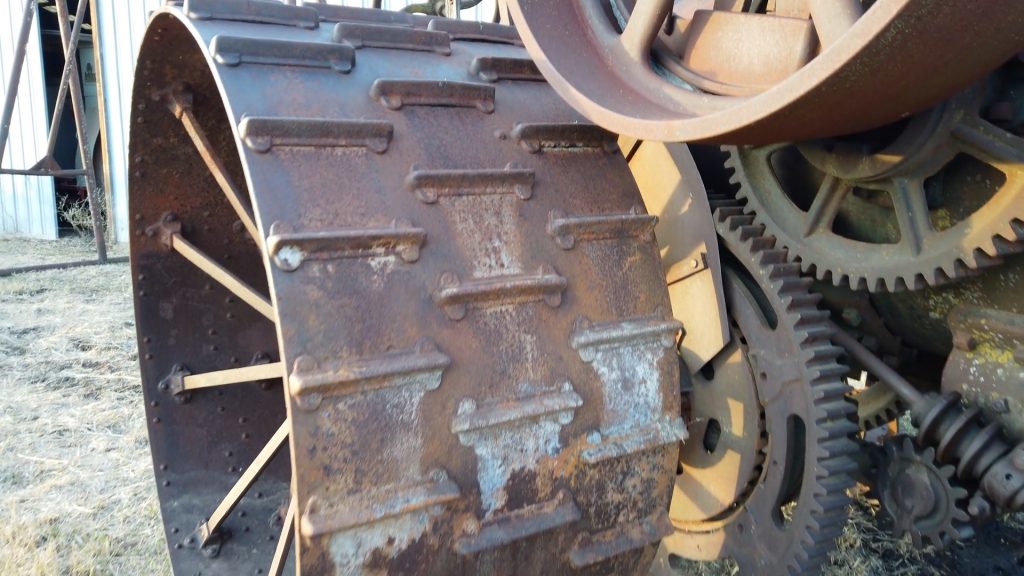 “I learned about Forrest Pence. This would have been in the ’90s I guess and I’d already restored my Avery return flue. I heard he had a bunch of steam engines, so I just jumped on my motorcycle and I drove all the way to Harvard, Nebraska,” Glen said.

When Glen arrived Forrest wasn’t home and the place was all locked up. He traveled into town and headed to the grain elevator. There he met someone who knew Forrest and helped manage his farm. 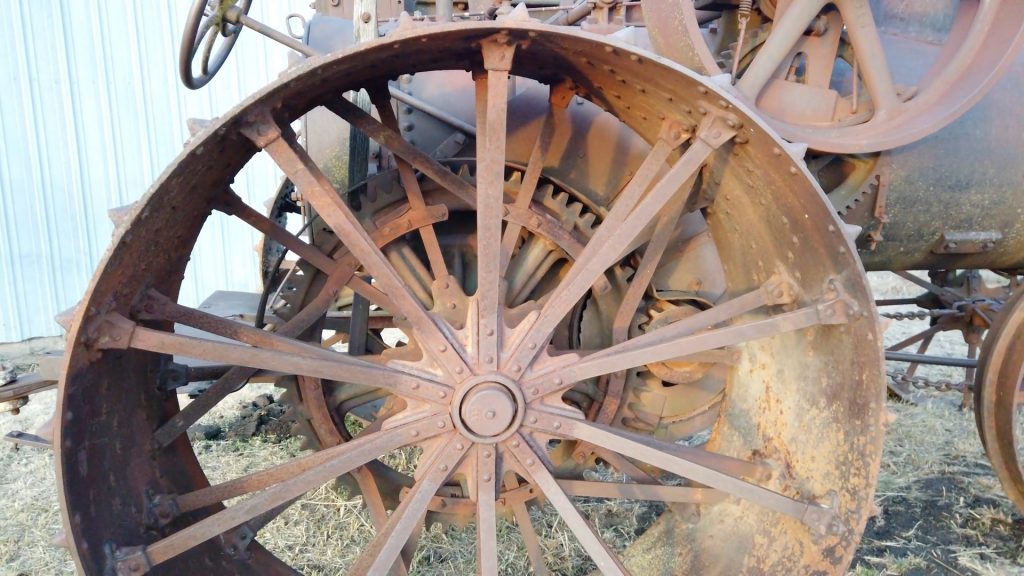 “I talked to him for 15-20 minutes and he finally said, I’ll just give you the key, you go out there and unlock the gate, just take your time. He knew I couldn’t haul much home on my motorcycle so he put his trust in me right there on the spot. I never met the guy before, but that’s the Midwest for you,” Glen said.

Glen took his time, snapped photos and toured Forrest’s collection of steam engines and early gas tractors. Then when he was done, he took the keys back, thanked the man again and hopped on his motorcycle to Marion, Kansas. 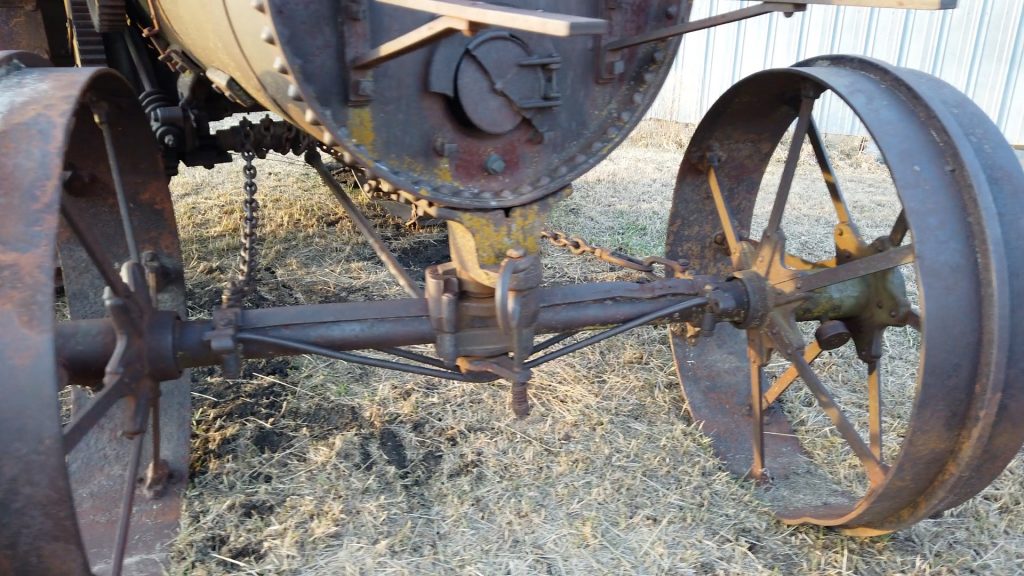 “We got Forrest Pence in our yard and this tractor was parked up against the building. Forrest I’m going to guess was in his mid-80s, kind of a young slender guy, a pretty eccentric kind of fella. This is the first time I’ve met him, so i don’t know what to expect,” Glen said.

Forrest got out of his vehicle and immediately headed towards the Avery steam engine. 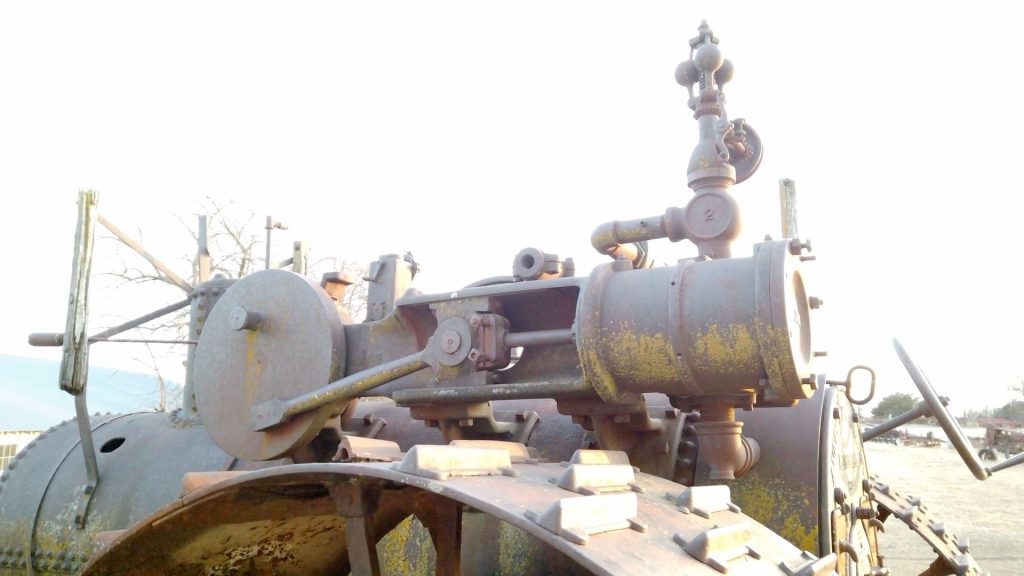 It took some time, but they got Forrest calmed down and Virgil explained how the steam engine came off the Avery Farm. So the three men got talking and came to the conclusion that the changes had something to do with the sandy soil and different terrain in Sterling, Kansas.

“We have some friends that are big time farmers outside of Sterling, Kansas. Two summers ago during the wheat harvest, they sent us a picture of their combine. They have the latest Case IH combine with a big 45 foot MacDon Header. They had a rainy season, but it’s dry enough to harvest, so the ground is dry on top. The combine is driving along and then it falls through the ground clear up to the header.  And the ladder is bent up, and there they are stuck, but there’s no mud on the tread of the tires.” 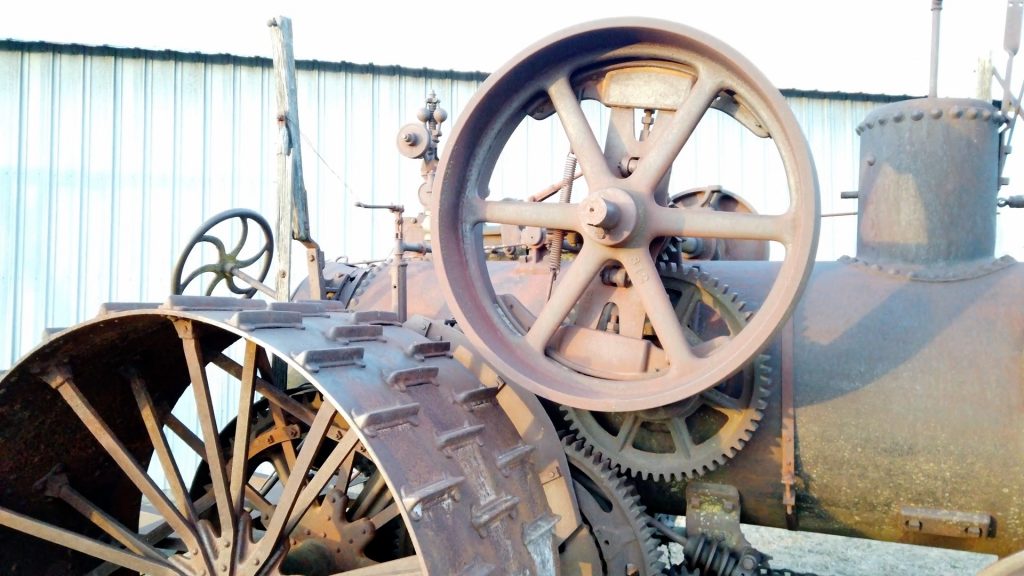 Glen learned from talking to the farmer that the soil near Sterling, Kansas has “under current.”

“After a rainy spell it dries off on top and you think you’re good to go and you might go fine and all of a sudden you just lose it,” Glen said.

So was Avery trying to solve the problem of “under current? It’s possible the company was attempting to do so by keeping the engine the same size while beefing up the rear wheels. But was it successful? With no records existing, there’d be only one way to find out. Maybe the new owner will restore it and then take it back to the soil of Sterling, Kansas for a test drive. 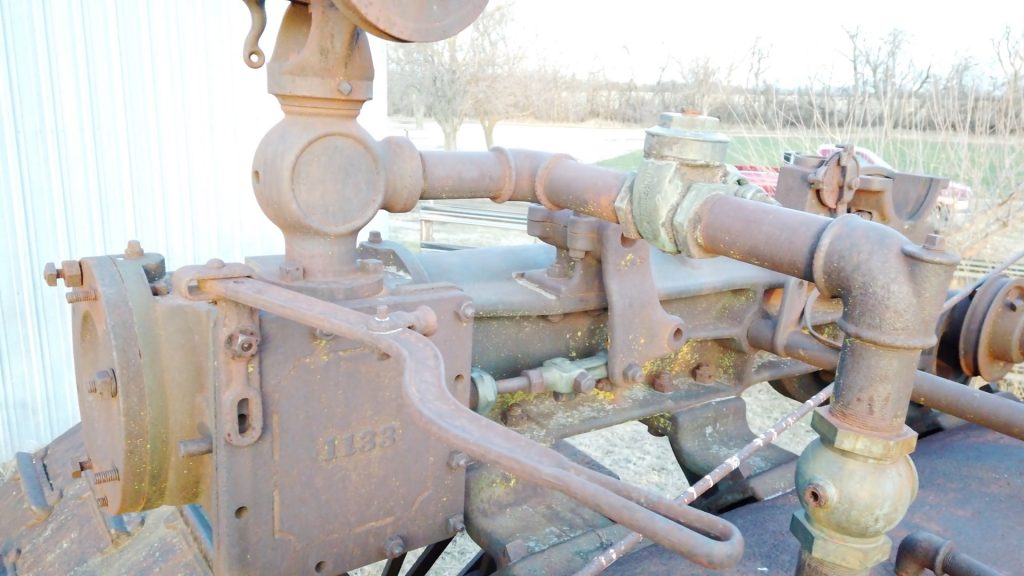 It’s no doubt this steam engine is a unique piece of Avery history.

The Litke Collection of Antique Tractors, Memorabilia and Equipment was a two day auction held on July 23 and 24 in Marion, Kansas. For more information visit, aumannvintagepower.com.